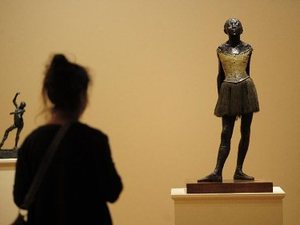 A bronze sculpture of a young ballerina by French Impressionist Edgar Degas has failed to find a buyer at Christie's New York auction of impressionist and modern art.

"Little Dancer Aged Fourteen" had a pre-sale estimate of $25 million to $35 million. The auction was Tuesday night, but there were no bids.

The original was made of tinted wax. After his death in 1917, Degas' heirs had 28 cast in bronze.

Most are in museums. Ten are in private hands, including the one that was offered at Christie's.