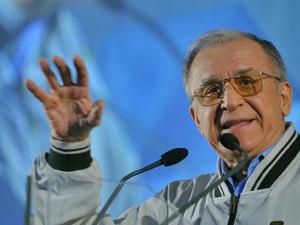 A Romanian court has launched a probe into former president Ion Iliescu for alleged crimes against humanity over the violent suppression of protests in 1990, months after the fall of the Communist regime, prosecutors said Wednesday.

"Mr. Iliescu has been informed that legal proceedings have been initiated against him," a spokesman for prosecutors told AFP.

The ex-president refused to answer questions from journalists as he left the prosecutors' office on Wednesday, where he had spent an hour.

He is accused of violently suppressing an opposition movement that staged sit-ins blocking downtown Bucharest for several weeks in mid-1990, just six months after the fall of Nicolae Ceausescu's Communist regime.

"The violent repression of the demonstration organized at University Square killed four people and wounded some 1,000, three of them with gunfire," the prosecution sid.

Virgil Magureanu, Romania's then-intelligence chief, told prosecutors Wednesday about his role in the incidents that cast a shadow over the country's transition from Communism.

The prosecution opened an investigation into the incident in March, after the European Court of Human Rights in September criticized Bucharest for failing to properly probe the violence.

Iliescu was in 2005 charged with murder and attempted murder in connection with the protests but the charges were dropped in 2007.