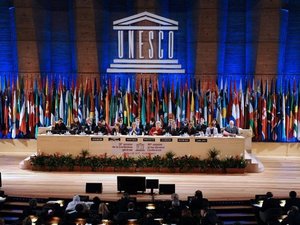 UNESCO's Director General Irina Bokova called on the United States Wednesday to find a way to continue funding the U.N. cultural agency after Washington stopped its financing for admitting the Palestinians.

"I call on the U.S. administration, Congress and the American people to find a way forward and continue support for UNESCO in these turbulent times," Bokova said in a statement in which she detailed the agency's work.

"In this time of economic crisis and social transformation, I believe that UNESCO's vital work to promote global stability and democratic values is in America's core interests," Bokova said.

Washington cancelled $60 million in UNESCO funding soon after the organization admitted the Palestinians in a vote at its general conference in Paris on Monday, despite fierce opposition from the United States and Israel.

Laws dating from the 1990s require the U.S. Israel's staunchest ally, to withdraw funding from any U.N. agency that admits Palestine as a full member before a peace deal is reached with Israel.

U.S. funding accounted for nearly a quarter of the organization's annual budget.

She also pointed out that UNESCO is the only U.N. agency with a mandate to promote Holocaust education worldwide.

"Using funding provided by the United States and Israel, UNESCO is developing curricula to ensure that the Holocaust is never forgotten," she said.

Both Washington and Israel had lobbied the organization to delay the vote, with the Jewish state warning that the membership bid was unilateral and would jeopardize the chances of reviving negotiations.

Israel has since accelerated Jewish settlement building on occupied Palestinian land and decided to withhold tax revenues it has collected on behalf of the Palestinians.