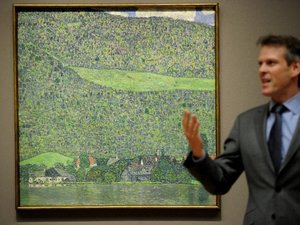 A landscape by painter Gustav Klimt that was stolen by the Nazis then returned this year to the family of the Jewish owner sold for a huge $40.4 million on Wednesday at Sotheby's in New York.

The painting, "Litzlberg am Attersee (Litzlberg on the Attersee)," easily topped its pre-sale high estimate of $25 million at the impressionist and modern sale.

Depicting a pastoral scene of towering, wooded hills rising from water into a bright sky, the landscape was stolen after the German annexation of Austria in 1938. It was only returned this spring to Georges Jorisch, grandson of the woman who owned it until the Nazis came.

Sotheby's autumn sale saw stronger results than rival Christie's, which had a poor night on Tuesday, with several of the main works, including a Degas bronze sculpture, failing to find buyers.

A centerpiece of Sotheby's catalogue -- Henri Matissse's monumental bronze sculpture of a woman seen from the back, "Nu de dos" -- was withdrawn just before the auction after being sold in a private deal.

The huge bas-relief bronze was sold to an unidentified buyer along with three others that form a group, all consigned by The Burnett Foundation of Forth Worth, Texas.

The auction house had been intending to sell them separately over the year, at prices of about $20-30 million, because as a group the price had been considered too forbidding in a nervous international market.

Overall, 57 lots of 70 sold, or 81 percent, and 13 failed to find buyers, including three works by Miro and one Renoir.