Persian Gulf May be Too Hot for Human Survival by 2090. Here’s What this Means for Your City 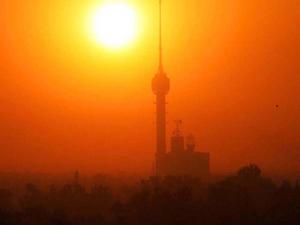 A study predicting deadly heat waves in the Persian Gulf by the century’s end has underscored concerns about the effects of rising global temperatures on cities in other parts of the world, including the United States.

Monday’s report in the journal Nature Climate Change warned that Persian Gulf cities could experience extreme summer temperatures that are literally too hot for human survival. But scientists say climate change will inevitably lead to hotter, longer heat waves and higher rates of heat-related deaths across large swaths of the planet.

A study by U.S. researchers released in August predicted that the number of “dangerous” heat events experienced by Americans each year will rise from a baseline of four — the average number during the period from 1981 to 2010 — to about 10 in the year 2030, and then to 35 by the year 2090.

Such heat waves could potentially cause large numbers of deaths, as occurred in the 1998 Chicago hot spell blamed for the deaths of 700 people, said the report by scientists from Rutgers University, the University of California at Berkeley and the Rhodium Group. But the chance of crossing the “extraordinarily dangerous” threshold forecast for Persian Gulf cities is slim — for now, said Robert Kopp, a co-author and associate director of the Rutgers Energy Institute.

Decades from now, the chances for an “extraordinarily dangerous” U.S. event start to creep higher, Kopp said. The lethal threshold is described as a “wet-bulb” temperature of 35 degrees C, or 95 degrees F, based on a complicated formula that measures the lowest temperature a parcel of air can reach by the evaporation of water into it. Typically it requires a “dry” temperature of at least 115 degrees and humidity above 50 percent.

“If you’re in the shade and you’re engaging in a 150-watt activity — moderate exercise — in an hour you’ll have a skin temperature and core temperature of 104 degrees,” Kopp said. “Those sorts of days have no precedent in the United States.”

But they could for other regions, in the relatively near future, scientists say.

Monday’s Nature Climate Change study said Persian Gulf cities from Dubai to Iran’s Bandar Abbas could experience summer days that surpass the “human habitability” limit, with heat and humidity so high that even the healthiest people could not withstand more than a few hours outdoors. Other Middle Eastern cities could approach the lethal threshold, including the Saudi holy city of Mecca, a destination for millions of Muslim pilgrims every year, according to the report in the peer-reviewed journal Nature Climate Change.

Scientists have long maintained that parts of the planet could experience extreme temperatures if global warming continues at current rates. But the suggestion that major world metropolises could cross the “habitability” threshold in the 21st century surprised some climate experts.

“The threats to human health may be much more severe than previously thought, and may occur in the current century,” Christoph Schaer, a physicist and climate modeler at the Institute for Atmospheric and Climate Science in Zurich, Switzerland, said in a commentary on the study’s conclusions.

“Our results expose a regional hotspot where climate change, in the absence of significant mitigation, is likely to severely impact human habitability in the future,” the authors write in the study.

The Persian Gulf region is already notorious for oppressive heat, with temperatures regularly surpassing 110 degrees F in the summer and heat-index values that contribute to high rates of heatstroke among outdoor workers.

The study’s authors say the worst impacts could be avoided if the world’s countries can find the will to curb emissions of greenhouse-gas pollution. In any case, urban planners will soon have to plan for major infrastructure changes as temperatures approach the lethal threshold.

“Although it may be feasible to adapt indoor activities in the rich oil countries of the region, even the most basic outdoor activities are likely to be severely impacted,” the report stated.