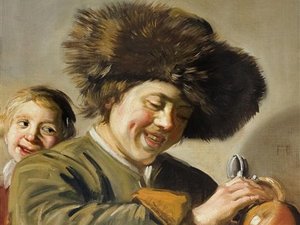 Police recovered two stolen paintings by Dutch masters and handed them back Thursday to the provincial museum they were stolen from five months ago. Three suspects are in custody, police said.

The 17th-century paintings, a depiction of two laughing boys by Frans Hals and a forest landscape by Jacob van Ruisdael, were snatched from the Hofje van Mevrouw van Aerden museum in the central town of Leerdam in late May.

The thieves triggered a burglar alarm, but had fled the building before police arrived. A search of the area immediately after the theft turned up only the frame of one of the paintings that had been dumped in a hedge.

A new tip about the paintings' whereabouts led to their discovery on Oct. 28, police said in a statement. A fourth suspect is on the run, police said.

Police have not estimated the value of the paintings, but called them valuable parts of the country's "cultural heritage."