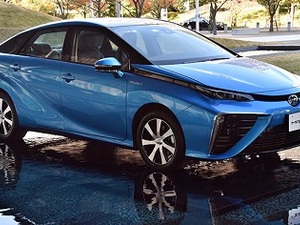 Japan has lofty ambitions to become a "hydrogen society" where homes and fuel-cell cars are powered by the emissions-free energy source, but observers say price and convenience are keeping the plan from taking off.

Prime Minister Shinzo Abe has dubbed hydrogen the "energy of the future", and hopes it will help Tokyo meet the modest emissions targets it has set ahead of a U.N. climate change conference this month.

Tokyo wants to see cars, buses, and buildings powered by the clean energy in the coming years, and has even laid out plans for a "hydrogen highway" peppered with fueling stations, all in time for the Tokyo 2020 Olympics.

Japan, which is the world's sixth largest greenhouse gas emitter, has "constructed a vision of society" based on hydrogen, said Pierre-Etienne Franc, director of advanced technologies for French industrial gas firm Air Liquide.

Toyota's hydrogen car, Mirai -- which means "future" in Japanese -- launched in 2014, after two decades of tireless research. The car recently rolled out in the United States and Europe.

While it has wowed some, production has lagged behind demand and high costs have turned off many consumers.

A Mirai fuel-cell vehicle costs 6.7 million yen, or about $55,000, nearly double a comparable electric car. Fuel cells work by combining hydrogen and oxygen in an electrochemical reaction, which produces electricity. This can then be used to power vehicles or home generators.

Environmentally-conscious motorists like the Mirai because unlike conventional cars, it does not emit CO2. It also has a longer cruising range and takes only a few minutes to refuel, compared to several hours required for an electric rival.

Nakai dismisses concerns that hydrogen poses a dangerous explosion risk -- the gas is highly volatile and flammable -- insisting the tank of the car has been rigorously tested and can "withstand any shocks". But he admits price remains a major barrier.

"The main problem is the cost -- we have just started, it doesn't happen overnight," he adds.

"In its superb ambition, Japan has failed in its strategy with extremely restrictive regulations," he said, referring to safety rules to prevent leakage of the flammable gas.

Building hydrogen stations is two or three times more expensive than in Europe or the U.S., he said.

With a 395-million yen ($3.2 million) price tag the stations remain scarce, although the government has vowed to build 76 of them by early 2016.

Toyota is not the only player: in late October Honda unveiled its own hydrogen car, and Nissan is also involved in the effort.

The hope is that increased competition could drive prices down.

Abe has laid out his vision for a hydrogen market worth one trillion yen ($8.3 billion) annually by 2030.

Equipping houses with hydrogen-producing technology is another part of the plan, with the first green homes unveiled in 2009.

The aim is to equip 1.4 million residences with the technology by 2020, and a staggering 5.3 million only a decade later.

It's a slow journey though. Only 100,000 houses are hydrogen-powered so far, despite government subsidies and efforts by manufacturers, namely Panasonic and Toshiba, to bring down prices.

At two million yen ($16,500) per house, the technology remains out of reach for many.

"The technology is not fully developed, it will likely take several more years before it reaches mass production," said Hubert de Mestier, a former executive with French energy giant Total.

Colorless and odorless, hydrogen is extremely light and takes up a lot of space so it has to be compressed before it is transported and stored, which adds to costs.

It's also not entirely environmentally friendly: greenhouse gas-emitting fossil fuels are often required to generate the gas in the first place.

"Selling the hydrogen economy without changing the method of production is heresy," says Franc.

Speaking at a Detroit automotive conference in January, Tesla chief executive Elon Musk -- who advocates battery powered electric cars -- rejected hydrogen as a viable alternative fuel citing its volatility and flammability. He added that it was a complicated process to produce energy this way.

He said: “Hydrogen is an energy storage mechanism, it’s not a source of energy. So you have to get that energy from somewhere. It’s extremely inefficient.”

Japan has said it would like to produce totally green hydrogen through electrolysis, where the electricity comes from renewable sources such as water, solar or hydraulic, as opposed to gas or oil.

The move comes after Tokyo was forced to boost the use of pricey fossil fuels to fill the gap left by shutting off nuclear reactors in response to the 2011 Fukushima disaster.

But some say the resource-poor country -- where 90 percent of electricity is now produced with fossil fuels -- is putting the cart before the horse.

"Japan should not be mistaken. If it is keen on becoming a sustainable country, the government should invest first in renewable energies" said Greenpeace ecologist Ai Kashiwagi.