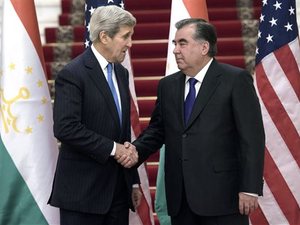 U.S. Secretary of State John Kerry visited ex-Soviet Tajikistan and Turkmenistan Tuesday to assure their leaders of U.S. support for security on their Afghan borders, as he nears the end of his five-nation tour of Central Asia.

Kerry met veteran Tajik President Emomali Rakhmon at the presidential palace in Dushanbe, pledging U.S. support in the face of instability across the frontier in Afghanistan, but urging the authorities not to use the fight against extremism to crack down on rights at home.

As the country with the longest border with Afghanistan in the ex-Soviet region, Tajikistan is presented with some "very real security challenges," Kerry said after the talks.

"I emphasized the United States' commitment to continue to work with Tajikistan and other countries in the region to strengthen border security," he said before embarking on the next leg of the trip to gas-rich Turkmenistan.

Tajikistan has already endured a devastating civil war since its independence from the Soviet Union in 1991 and is deeply concerned about violence along the 1,300-kilometer (800-mile) southern border it shares with conflict-torn Afghanistan.

Those fears have grown as the United States shrinks its troop footprint in Afghanistan and after the Taliban stormed and briefly held the strategic northern city of Kunduz last month.

Autocratic ruler Rakhmon, who came to power in 1992, has also been accused of playing up the threat of Islamist extremism to crack down on his domestic opposition.

While offering Washington's ongoing commitment to helping Tajikistan secure its border, a task Russia has historically helped with, Kerry said fighting terrorism should be done "in a way that balances human rights, religious freedom" and political participation.

"Let me assure you that the United States remains committed to a Tajikistan that remains sovereign, secure and prosperous," Kerry said ahead of closed-door talks.

"I think it's fair to say that we have as much... security cooperation with Tajikistan as with any other country in the region," Kerry added.

"We're both deeply concerned about security in Afghanistan and on the border, about counter-narcotics and terrorism."

After the talks in Tajikistan, Kerry flew to isolated Turkmenistan, an energy-rich state that borders Afghanistan, to meet its leader Gurbanguly Berdymukhamedov at the ornate gold-domed presidential palace.

He thanked Berdymukhamedov for setting an agenda that included issues of "economic cooperation, human rights, security and stability" as the two greeted each other warmly.