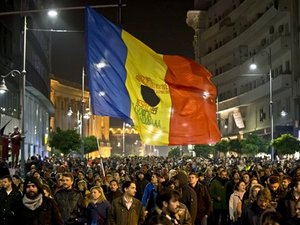 Romania's embattled Prime Minister Victor Ponta, mired in a corruption scandal, resigned Wednesday following a deadly nightclub blaze, a day after more than 20,000 people rallied in Bucharest to demand he step down.

The 43-year-old announced his resignation on television, saying it was right that top officials took responsibility for Friday's tragedy at the Colectiv disco in Bucharest, which left 32 dead and nearly 200 injured.

Ponta, Romania's premier since 2012, had faced weeks of intense pressure to quit after going on trial in September facing charges of fraud, tax evasion and money laundering.

"I am stepping down as prime minister," he said. "I hope the government's resignation will satisfy the people who came out in the streets."

The Social Democrat added: "I have to acknowledge the legitimate anger of the people."

Demonstrators massed on Tuesday evening in Bucharest's Victory Square, the seat of government, calling for Ponta's resignation and that of his interior minister, Gabriel Oprea.

The marchers chanted "Ponta resign" and "killers", and some waved the national flag with holes in it -- a symbol of the popular revolution 25 years ago that toppled dictator Nicolae Ceausescu.

The toll from the nightclub fire would have been far worse but for the heroism of two men, physicist Claudiu Petre and drummer Adrian Rugina, who went several times into the burning club to rescue trapped revelers, only to die themselves.

Witnesses said a fireworks display triggered the blaze at the Colectiv, which was located in a former shoe factory. The inferno sparked a deadly stampede. Nearly 200 people were injured in the tragedy.

Three of the nightclub's bosses were arrested on Monday on suspicion of manslaughter over the fire, which officials and witnesses have blamed on a failure to follow safety regulations.

The venue did not have the required authorization to hold concerts or to stage pyrotechnic displays, the secretary of state at the interior ministry, Raed Arafat, has said.

The tragedy shocked Romania and prompted Iohannis -- Ponta's bitter political rival -- to call for fundamental change in a society riven by corruption.

"We should no longer tolerate government incompetence, institutional inefficiency, and we cannot let corruption spread to the point that it kills people," he said on Sunday.

Prosecutors accuse Ponta of receiving the equivalent of 55,000 euros ($63,000) from Dan Sova, a political ally and member of parliament suspected by prosecutors of abuse of power but who enjoys immunity.

Ponta stepped down as head of the Social Democrat party in July, but survived a no-confidence vote in parliament in September shortly after his trial started.

The charges date back to 2007-2011, when Ponta -- the first Romanian head of government to stand trial while still in office -- was working as a lawyer.

Prosecutors also suspect Ponta, a keen rally driver, of conflict of interest during his time as premier, but that probe was stymied when parliament refused to lift his immunity from prosecution. Ponta's party holds a comfortable majority in the chamber.

Dozens of former politicians and judges have been swept up in investigations launched by the anti-corruption agency in one of Europe's poorest and most graft-plagued countries.

Wednesday's drama comes as Romania hosts a summit of Central and Eastern European leaders which is expected to ask for greater NATO involvement in the region, rattled by the conflict in nearby Ukraine.