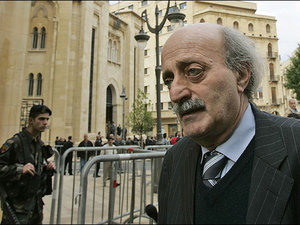 He told the daily that a boycott of the meeting would be “suicide”.

The Lebanese Forces and Free Patriotic Movement have said that they will not attend the session because the parliamentary electoral law was not included on its agenda.

The Kataeb Party said it would not attend before the election of a new president for the country.

“The chance to hold a legislative session does not happen everyday,” remarked Jumblat.

“We should take advantage of it without delay and we should stop our self-destruction,” stressed the lawmaker.

Head of the Musatqbal bloc MP Fouad Saniora meanwhile denied to As Safir claims that the bloc will boycott the session if the LF and FPM did not attend.

“All sides must realize the importance of attending the meeting,” he said.

The Mustaqbal bloc sees the session as an opportunity to transport Lebanon to safety, given the financial dangers it is facing, added the former premier.

“We still have hope to resolve the boycott through political contacts,” Saniora said.

Speaker Nabih Berri had called for a legislative session to be held on November 12 and 13.

The parliament had last convened to address draft-laws on November 5, 2014.

The Syrian Druze Sheikhs of Dignity movement has angrily accused the regime of “declaring war” against it after state media ran a report linking the independent group of being linked to the killing of a top Baath Party official in Suweida.

The Sheikhs of Dignity movement warned:

It is time for Jumbo to distance himself from Ebola....

How can the State commit suicide when Hezbollah has killed it already. The Parliament has no constitutional authority to take up a legislative agenda when the Presidency remains vacant. What can be done, other than to elect a President, dissolve the Parliament, hold Parliamentary elections and then restore the State.
Ah, but this cannot be done because Hezbollah is fighting a war in Syria and does not need the restraint that a Government in Lebanon may put on to it. So we have paralysis that has become rigarmortis. And Jumblatt is worried about committing suicide?

tell us the contribution of hezbollah to lebanese well-being, economy, environment, social welfare....? instead of trying to appear smart by sending idiotic posts... be a man and give your arguments or i guess it is too demanding from you....

No one respects the constitution, the country is breaking at the seams and no one is willing to do the right thing to salvage the nation....every rotten politician from all sides needs to commit suicide to give the people a chance to start anew.

Aouni trollers out today I see.