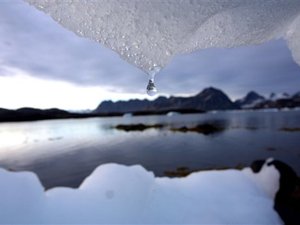 Global warming could elevate disease, ravage crops and push 100 million more people into poverty without action to prevent it, the World Bank warned in a disturbing new report Sunday.

The problem of climate change is already hampering efforts to reduce poverty, the Bank said, and the poorest people are already suffering more than others from lower rainfall and extreme weather tied to warming.

"Without rapid, inclusive and climate-smart development, together with emissions-reductions efforts that protect the poor, there could be more than 100 million additional people in poverty by 2030," the Bank said.

The report, "Shock Waves: Managing the Impacts of Climate Change on Poverty," sounded an alarm for the need for tough action at the COP-21 Paris global summit on climate change.

On Friday, the United Nations warned that nations' carbon-cutting pledges go nowhere near far enough to prevent warming, and that much greater commitments are needed at the November 30-December 11 summit.

The World Bank report said the most impoverished people in the world are already being hurt badly by extreme events tied to the warming trend, including heat waves, drought and flooding, because they are both more dependent on the land and live in regions more at risk that lack good public services.

"The poor are more vulnerable to climate-related shocks than wealthier people because they are more exposed, lose more in relative terms, and lack the financial systems and social safety nets that would allow them to better prepare and cope," it said.

It laid out a stark set of forecasts:

- 150 million more people could be at risk from malaria, diarrhea and stunting

- Food prices in Africa could rise by 12 percent from the impact of climate change alone by 2030. "Poor people spend a larger share of their budget on food than the rest of the population," the report notes.

Overall, governments and economies will be challenged by the change and need to develop policies to respond, in addition to taking more action to reduce the carbon emissions that cause warming, the Bank said.

"While emissions reduction policies cannot do much regarding the climate change that will happen between now and 2030... development choices can affect what the impact of that climate change will be."

The report "sends a clear message that ending poverty will not be possible unless we take strong action to reduce the threat of climate change on poor people and dramatically reduce harmful emissions," World Bank President Jim Yong Kim said.

"Climate change hits the poorest the hardest, and our challenge now is to protect tens of millions of people from falling into extreme poverty because of a changing climate."