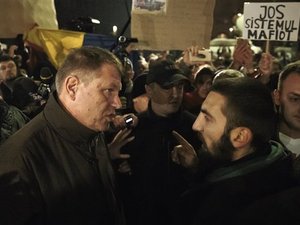 Romania's president appealed for protesters' support on Sunday in reforming the country, as the death toll rose to 45 from a horrific nightclub fire that brought down the government.

Klaus Iohannis was met with shouted slogans and whistles from demonstrators seeking "profound change" as he paid a visit to the capital's University Square, the focal point of nearly a week of protests.

"It is only together that we can make this change, neither you alone, nor I alone can do it," Iohannis told the several hundred-strong crowd on the sixth consecutive night of demonstrations.

Thousands of Romanians have taken to the streets in mass anti-government protests since the deadly October 30 blaze at the Colectiv nightclub in Bucharest, which also left scores injured.

Many viewed compromised safety standards at the club as emblematic of a wider problem with rampant corruption in one of the European Union's poorest nations.

Prime Minister Victor Ponta, who had been under pressure for weeks as he goes on trial on corruption charges, quit on Wednesday, saying it was right for top officials to take responsibility for the tragedy.

Among the latest victims of the fire to succumb to their injuries on Sunday was the drummer of a local hard rock group, who had been on stage when the inferno broke out and who was about to be transferred to a Swiss hospital for treatment.

The plane carrying the musician turned back when he took a turn for the worst shortly after take-off. The group's two guitarists died the day after the blaze while two others are still seriously hurt in hospital.

"The next seven days will be the most difficult with regards to treating the wounded," Health Minister Nicolae Banicioiu said Saturday. "We welcome any help, any medical teams coming from abroad."

With the death toll mounting steadily in recent days, Romanian media criticized the authorities for failing to transfer some of the wounded to hospitals abroad in time.

"Why has Romania not asked for international help before?" Gandul daily wrote, adding that the country's hospitals were struggling to treat more than 140 people wounded in the fire.

Eighteen people were transferred abroad on Saturday -- eight to Belgium, eight to the Netherlands and two to Austria. Two more will be flown to Britain and Hungary on Sunday, the defense ministry said.

Doctors say some 100 injured remain hospitalized, among them 44 in critical condition.

The fire broke out when fireworks let off during a rock band's performance triggered a blaze and a stampede as panicked revelers tried to flee.

Initial investigations suggest numerous breaches of the safety rules at the club, including a lack of emergency exits and the fact that flammable materials were used for sound insulation.

The club's three bosses, detained since Tuesday on manslaughter charges, did not have the authorization to host concerts, let alone pyrotechnic shows.