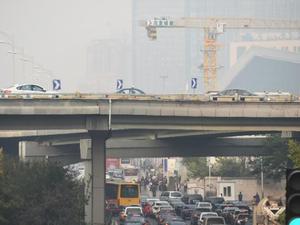 A swathe of China was blanketed with dangerous acrid smog Monday after levels of the most dangerous particulates reached almost 50 times World Health Organization maximums.

Levels of PM2.5, the tiny airborne particles considered most harmful to health, reached 860 micrograms per cubic metre in Changchun, the capital of Jilin province in the northeast, on Monday.

The World Health Organization’s recommended maximum is a 24-hour average of 25 micrograms.

China's chronic pollution problem has been linked to hundreds of thousands of premature deaths, and has become a major source of popular discontent with the government.

PM2.5 particulates can play a role in heart disease, stroke, and lung ailments such as emphysema and cancer.

Levels of the particulates reached 1,157 micrograms per cubic metre in Shenyang, capital of the neighbouring province of Liaoning, on Sunday, data from city's own environmental protection bureau showed.

The extreme smog was caused by the city's coal-powered public heating system being switched on with the onset of winter, and by heavy pollution blown in from other provinces, it said on a verified social media account.

The official news agency Xinhua blasted the city’s emergency response as “useless” in the face of "such severe haze and pollution".

It quoted a Shenyang resident as saying: “When you go out you feel the air burns your eyes, your throat hurts, so you go buy a mask, but it’s not really clear what we should specifically be doing."