Can the University of California Help Answer our Climate Problems? 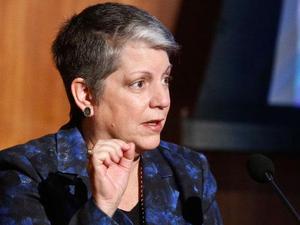 The University of California (UC) renewed its commitment to fight climate change at the UC Carbon and Climate Neutrality Summit at UC San Diego Tuesday. University president Janet Napolitano assured California Gov. Jerry Brown and other summit participants that the university’s 10 campuses will continue to act as “living laboratories” for climate change solutions.

“Addressing these challenges, and reducing our carbon footprint, is a moral imperative,” Ms. Napolitano, a former governor of Arizona and Homeland Security secretary, said at the summit.

Through the Carbon Neutrality Initiative, announced by Napolitano in 2013, UC is committed to making all buildings and vehicles associated with its 10 campuses carbon neutral by 2025. To successfully emit net zero greenhouse gases in 10 years, the University of California will primarily focus on energy and food waste.

Dr. Ram Ramanathan, a distinguished professor at Scripps Institute of Oceanography at UC San Diego and chair of the UC Summit, tells The Christian Science Monitor that the goal of the two-day summit was to address “scalable solutions” to the global problem of climate change.

“We are saying no, no, no. It is not just theory, it is done,” Ramanathan explains. “That’s the message people need to hear. This is the way of the future.”

UC San Diego generates 95 percent of its own power, UC Irvine gets hydrogen power from sewage, and UC Berkeley has cut down on power consumption by using smart sensors.

And at the state level, Gov. Brown has pushed for uncompromising climate initiatives. Most recently, Brown signed a climate-change bill earlier this month that aims to double energy efficiency in homes and offices, generate half of the state’s electricity from renewable sources such as solar and wind by 2030, and cut the state’s gasoline use in half.

“While California is not a planet, it’s still a global leader,” said Brown at the summit. “And what we do will not be disseminated.”

So, the University of California might stand alone now among universities with its neutrality goal. But the school's leaders believe they are paving the way to the future.