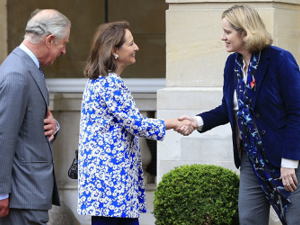 Deforestation may have triggered the recent Ebola outbreak in west Africa, France’s environment minister Ségolène Royal told a London summit hosted by the Prince of Wales ahead of next month’s Cop21 conference.

“They had to clear the forest to begin subsistence agriculture and the deforestation has also been caused by mining activity and large-scale logging for export,” she told the high-level meeting at Lancaster House.

“This destruction of the natural habitat of fruit-eating bats drove the animals to approach human settlements to find food and the virus may have been transmitted during this increased contact resulting from deforestation,” she said.

The one-day conference on deforestation and climate change, attended by environment ministers from Brazil, Panama, Congo and Norway, as well as senior representatives from Unilever, Marks & Spencer and Cargill, was hosted by the prince’s International Sustainability Unit.

Next month Charles, who in 2007 set up the Prince’s Rainforest Group to find a solution to save the world’s threatened forests, will deliver a keynote speech at the invitation of the French president, François Hollande, before world leaders at the Paris Cop21 conference, as attempts are made to reach new international agreements to help limit global warming to no more than two degrees.

Addressing delegates in London, he said: “Paris will be an absolutely crucial milestone, as you will all know better than I, in the long overdue international effort to keep to a two-degree world.”

He added: “It must however send an unequivocal, long-term signal to the international community, and to global markets, that the transition to a low-carbon, sustainable, climate-compatibility economy is firmly and irreversibly under way. And that a two-degree world is therefore, still just, if we stretch every sinew by setting a proper price for carbon, within reach.”

While “heartening” progress had been made over deforestation in recent years, he said “the hard and profoundly depressing fact is that rates of deforestation and degradation continue to increase”.

Expressing his hopes for real progress in Paris, he concluded: “Billions of people and, indeed, what is left of the rest of a rapidly diminishing creation, depend upon whether this time, real concerted action, and not just words, can be taken.”