Insects Should be Part of a Sustainable Diet in Future, Says Report 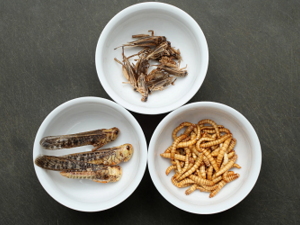 Insects should become a staple of people’s diets around the world as an environmentally friendly alternative to meat, according to a report by the UK government’s waste agency.

But persuading consumers to overcome “the yuck factor” will be a key issue, says the report by the Waste and Resources Action Program (Wrap) which assesses challenges to the development of the food system in the next 10 years.

The problem of supplying the UK’s population with a nutritional and sustainable protein supply will be “one of the defining challenges of the coming decades”, says the report.

“Novel foods in Western diets will incorporate insects to some degree, in a similar way to the spread of sushi from Japan in 2000s, but the major growth will be for feed to livestock,” the report said, citing insects as a novel alternative source of protein.

Richard Swannell, director of sustainable food systems at Wrap, said: “We are in danger of, by 2020, the land that is available to us that is productive from an agricultural perspective, being pushed to its limits. So if we can find alternative protein sources that reduce the need for land use or land use change then that’s a really good thing to look for.”

The report also recommends increased consumption of seaweed, which Swannell stated has “high nutritional value”, with 65-90% protein content. Lab-grown meat is suggested as another alternative protein source because it requires 99% less land to produce and produces 96% less greenhouse gas.

Ground cricket flour is already being used as a protein source in North America, he said.

The adoption of insects as a protein in animal diets will be “more straightforward”, added Swannell.

Reining in the world’s appetite for meat is essential to tackle climate change, according to a report published last year by the Intergovernmental Panel on Climate Change.

Meat requires much more land and water for the production process. Beef is a particular issue, using 28 times more land than other meats and 160 more than carbohydrate staples, with some experts arguing that giving up beef can reduce an individual’s carbon footprint more than giving up their car. But fears of a consumer backlash are preventing change, according to a leading thinktank.