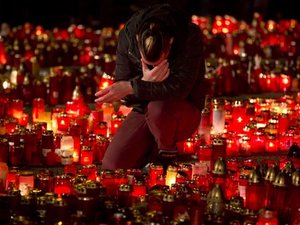 Four more people have died of injuries sustained in a devastating nightclub blaze in Romania, taking the toll in the inferno that brought down the government to 50, hospital sources said Wednesday.

Two of the four latest victims of the October 30 fire at a Bucharest club had been undergoing treatment in Britain, where they were transferred at the weekend.

The other two were in hospital in Romania.

Colectiv nightclub was packed with revelers attending a rock concert when fireworks were let off, triggering a blaze and a stampede.

Twenty-six people died on the spot, with another 200 suffering injuries.

Around a dozen people were still listed in critical condition in Romanian hospitals Tuesday. More than 30 others have been flown abroad for treatment.

Initial investigations pointed to numerous breaches of safety standards at the club, which were seen as emblematic of the rampant corruption that has plagued one of the European Union's poorest nations.

The venue's three owners have been detained on suspicion of manslaughter.

The tragedy sparked mass anti-government protests, which led to the resignation of Prime Minister Victor Ponta, who had already been under pressure to quit over allegations of tax evasion and money laundering.

On Tuesday, former EU agriculture commissioner Dacian Ciolos was appointed as his successor.