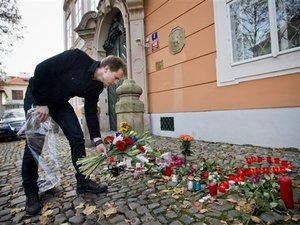 He said in a statement: “We watched with great sorrow the horrific developments in Paris that targeted innocent civilians in a barbaric and unjustified manner.”

“Lebanon, which two days ago suffered from the death of dozens of its sons in an ugly terrorist crime, stresses its solidarity with the French people during these difficult times,” he added.

“Lebanon trusts that France is capable, through the determination of its people, to overcome this painful ordeal in order to remain a beacon of liberty, fraternity, and equality,” declared Salam in a statement.

He said via Twitter: “The Paris attacks are a fatal blow that the powers of darkness have dealt against Islam.”

“After the September 11 attacks, the world entered the chaos of Afghanistan and later Iraq,” he tweeted.

“After November 13, in Paris, greater chaos awaits us,” warned the MP.

Later, head of the Mustaqbal Movement MP Saad Hariri condemned the attack, addressing Hollande by saying: “These attacks were targeted against the country of freedom, equality, and fraternity.”

“The attacks should increase the international community determination to reach solidarity and translate into action their efforts to combat this unprecedented wave of terrorism that has no limits and that threatens the world,” he remarked.

At least 128 people were killed and 180 wounded when gunmen opened fire against people in a wave of attacks throughout Paris.

The Islamic State group later claimed responsibility for the operation.

Investigators said at least eight attackers were dead by the end of the violence -- the bloodiest in Europe since the Madrid train bombings in 2004 -- with seven of them having blown themselves up.

All warmongers have evil souls and will end up in Hell

I am Canadian from Lebanese origin, stand with all the free people of France and Lebanon against these sub-human Evil monsters. All my heart with the victims and their families.
Lessons to be learned: Never trust an extremest. Being a moderate will gain my heart even if you are a Jewish, Syrian Sunni, Iranian Shia, Indian Hindu, Chinese Budi etc etc...