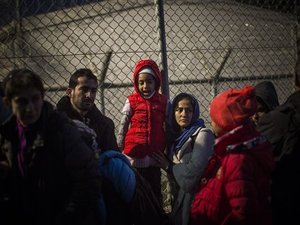 Poland's new right-wing prime minister on Wednesday took aim at a hotly contested EU program for the redistribution of refugees around the bloc, insisting that some members were using it to burden others.

"Attempts to export a problem that certain countries have themselves created without the input of other members cannot be called solidarity," Prime Minister Beata Szydlo told parliament in a keynote policy address ahead of a confidence vote her majority Law and Justice (PiS) government is expected to win with ease.

Referring to the Paris terror attacks, Szydlo also told legislators that her "government's top priority is the security of Poles."

Her comments come as last week's Paris attacks and the discovery of a Syrian passport near one of the assailant's bodies have revived the European debate on whether to take a harder line on migrants.

With Europe facing its biggest migration crisis since World War II, EU states have bickered for months on how to stem the flow and share out the new arrivals, the majority of whom head to wealthier members like Germany.