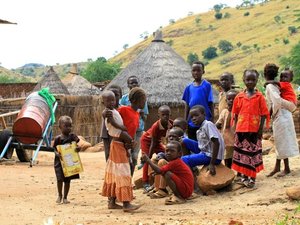 It is the second time Khartoum has addressed such complaints to the Security Council since southern independence in July, reflecting the fragile relations between the former civil war enemies.

The letter accused Juba of supplying the rebels in Blue Nile state with "anti-aircraft missiles, tanks, mines, guns and ammunition," as well as "an infantry battalion to strengthen the insurgency in Kurmuk."

The Blue Nile rebel stronghold, which straddles the border with Ethiopia and is also close to South Sudan, was overrun by the Sudanese Armed Forces (SAF) on Thursday, after two months of conflict in the politically divided state.

The letter, which was delivered to the president of the Security Council, also claimed that South Sudan was sheltering a large number of rebels who fled from Blue Nile south of the border to the town of Renk.

Blue Nile and nearby South Kordofan both have strong historic ties to the south and were key battlegrounds in the devastating 1983-2005 conflict between Khartoum and the SPLA, the former southern rebels turned regular army of South Sudan.

Observers have warned that the fighting there risks dragging the two countries into an all-out proxy war and torpedoing bilateral talks on key outstanding issues, including border demarcation and management of the oil sector.

But rebel leader Yasser Arman on Thursday rejected Khartoum's allegations of southern support for the SPLA-North, saying they were part of a "fear campaign" aimed at deflecting attention from the atrocities it had committed.

"The war in Blue Nile is more than 20 years old. The Republic of South Sudan is just four months old... South Sudan is not involved," he told AFP by phone.

"Kurmuk was a battle (that we lost). But Khartoum will never win the war. We are an experienced guerrilla movement. This is just the beginning," he added.

South Sudan's army also denied any involvement in the fighting north of the border, despite the historic connections to the south of the rebels fighting there.

"(They) don't need anyone to help them, they did it themselves. These people were fighting for 21 years in the bush. They were fighting over socio-economic and political grievances against Khartoum," said SPLA spokesman Philip Aguer.

He insisted that, since southern independence, the SPLA and the SPLA-North were completely separate organizations.

Fighting has raged in Sudan's volatile Border States since June, apparently sparked by the army's insistence on disarming indigenous Nuba troops in South Kordofan not under its control, as Khartoum moved to assert its authority within its new borders.

The conflict spilled into Blue Nile three months later, prompting fears of a mounting humanitarian crisis, given the large numbers of people displaced and the government's expulsion of international aid agencies from the two states.

It also appears to have aggravated the security situation south of the border.

Last week, the SPLA clashed with a rebel militia in oil-rich Unity state's Mayom County, just across the border from South Kordofan, in which around 80 people were killed, according to state officials.

"The commanders of these rebels in Unity state are stationed in Khartoum," and Sudan is not only transporting them across the border but supplying them with guns and landmines, Aguer claimed on Thursday.

Juba has repeatedly accused Khartoum of wanting to destabilize the new country by arming rebel groups, as it did during the civil war, claims rejected by the north.