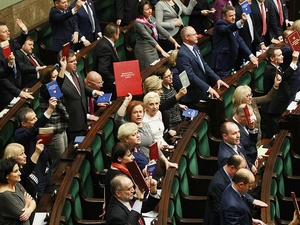 Poland's conservatives have only been back in power for a few weeks but they are already sowing alarm in the EU member state by trying to take control of any organ that could keep them in check.

The governing Law and Justice (PiS) party that won the October general election after eight years in opposition wasted no time in replacing the heads of the country's secret services.

The euroskeptic party, which is led by former premier Jaroslaw Kaczynski, also has plans to overhaul state media and at the moment has the Constitutional Court in its crosshairs.

PiS-backed President Andrzej Duda, who was elected in May, on Thursday ignored an order by the court to swear in three judges picked by the previous parliament when the liberal Civic Platform (PO) party was in power.

He said on public television that he stood by his decision to instead appoint four other judges to the top judicial body whom he hastily swore in during a late-night ceremony on Wednesday.

Experts in constitutional law, including one of his own professors, have accused Duda -- a trained lawyer -- of violating the constitution.

"I've known him for 20 years, he's a good lawyer, but a good lawyer should know what democratic rule of law is," Duda's PhD advisor Jan Zimmermann told public radio.

Fellow expert Marek Chmaj, a professor at the University of Social Sciences and Humanities in Warsaw, also voiced concern over Duda's stance: "At the very least it's strange and worrisome."

Spokespeople for the PiS, as well as front-bench PiS lawmaker Ryszard Terlecki, have countered that the court's rulings "only concern the past" and denied there was any conflict between the institution and the presidency.

Duda may be president and PiS colleague Beata Szydlo prime minister, but the undisputed boss of Poland's populist, Catholic right is Kaczynski.

The PiS leader is known for being a fan of the political model of Hungarian hardline Prime Minister Viktor Orban, who has cracked down on media freedoms and the justice system in his country.

"The day will come when we'll make it, we'll have Budapest in Warsaw," Kaczynski said in 2011 after the general election won by rival party the PO.

More recently, he has repeatedly said that his goal is to "fix" Poland -- for which he needs the cooperation of the secret services, the top court and state media.

Just days after Szydlo's cabinet obtained parliament's vote of confidence, the government replaced the heads of four of the country's intelligence services.

The head of the fifth, the Central Anti-corruption Bureau (CBA) resigned a couple of days later.

Duda also pardoned the controversial former head of the CBA, Mariusz Kaminski, who was found guilty last March of overstepping his jurisdiction as CBA chief and sentenced to three years behind bars.

Then came the ongoing constitutional crisis, as the PiS and the PO feud over whose judges should serve in the Constitutional Court.

Duda had refused to swear in the judges elected by the former liberal parliamentary majority by saying it "violated the democratic order" to appoint two new judges before their predecessors' terms were up.

The Court agreed that two of the five judges were chosen prematurely but also faulted Duda for refusing to swear in the remaining three.

After the ruling, Duda said he would set up a working group to reform the Court, notably how judges are elected.

Next up is an overhaul of state media, which Kaczynski has accused of masking reality "behind a screen on which a film is projected for the little people".

The PiS has plans to turn the PAP news agency and public television and radio -- all currently state-owned businesses -- into national cultural institutions like the opera or the national museum.

Kaczynski claims the state media was politicized by the previous government.

Culture Minister Piotr Glinski has said that attempts to buy out foreign shareholding in private media groups would possibly start as early as the end of the year.