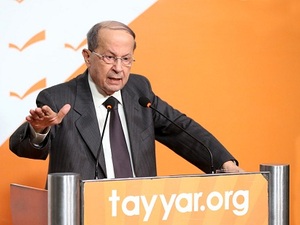 A prominent ministerial source told the daily that the talks will kick off efforts by Hizbullah to persuade its ally, Aoun, to accept Franjieh's potential presidential nomination.

Aoun is a candidate himself and Hizbullah has so far been committed to his candidacy.

“Hizbullah will seek to convince Aoun to accept the political settlement aimed at resolving the deadlock in the country, because the deal is greater than all sides,” added the source.

“It is a bitter pill, but we have to take it because the country can no longer tolerate the current situation,” it continued.

An agreement with Lebanese Forces chief Samir Geagea is also necessary, it stated.

The ministerial source revealed that Mustaqbal Movement leader MP Saad Hariri “does not want to elect a new head of state without reaching an understanding with Geagea,” who is a presidential candidate himself.

Franjieh's chances to reach the Baabda Palace had recently made a dramatic surge in the wake of a Paris meeting between him and Hariri.

The nomination has created tensions among the Christian camps of the Kataeb Party, LF, and Free Patriotic Movement, who all oppose the manner in which Franjieh's candidacy is being proposed.

The candidacy has also created a divide between the Mustaqbal Movement and LF, both allies in the March 14 camp.

Lol this is only a report? Hezbollah never wanted Aoun to begin with, but they also know Aoun won't bow down to Franjieh (neither will Geagea or Gemayel), so the vacuum continues...

Hezbollah will not nominate Franjieh if Aoun rejects him. The Franjieh momentum will come to an end

Gossip seems to be reports according to Naharnet.

nusra.boy I am stating the same as the officials did.
I do not invent stories and reports as Naharnet does.

What kind of Source is this?
How can you report unofficial anonymous sources?

Gen. Aoun remains the candidate of the Resistance, all these political games can't change that.

You are saying that Ebola wants to pursue the void...this is precisely what we are accusing Ebola of : destroying the country...

Hezbollah will laugh all the way to the parlament if they can secure 2/3 for Franjieh. With Aoun things are a little different. Aoun has proved before to be unpredictable, stubborn and to a certain extent nationalistic.