Report: Hizbullah in a Meeting with Franjieh, Adheres to Aoun's Nomination 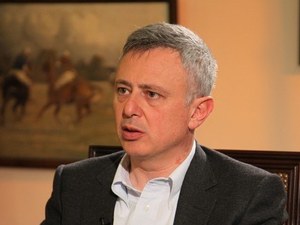 Well informed sources confirmed that a meeting between Hizbullah leader Sayyed Hassan Nasrallah and Marada Movement chief MP Suleiman Franjieh took place two days ago and highlighted the party's stance on the nomination of the latter for the top state post, An Nahar daily reported on Saturday.

“The meeting was not positive with regard to the nomination of Franjieh, which reflects Hizbullah's cautious stance from the proposed settlement,” unnamed sources told the daily on condition of anonymity.

The two men met on Thursday it said.

Franjieh emerged in recent weeks as a potential presidential candidate in the wake of a meeting he held with Hariri in Paris.

His candidacy is being proposed alongside a settlement that would end the political deadlock in Lebanon.

The efforts to nominate Franjieh have however been met with objections from the Christian parties of the Kataeb, Free Patriotic Movement, and Lebanese Forces.

For its part, As Safir daily highlighted the details of the meeting and said that “Nasrallah's words were clear on the presidential file,” and that “Franjieh has therefore realized that Hizbullah will not back away from nominating its ally MP Michel Aoun as long as the latter adheres to his candidacy.”

Almost two years with no President, what's the heck is going on here ?

How hard it is to find a neutral president with no criminal record like all the current candidates?

going to get it (Guest) 5 years

the narrative as published in assafir and alakhbar of the nasrallah/frangieh meeting is embarrassing to frangieh, how hassin dressed down slimmi as if he was some kind of delinquent child