French Teacher who Claimed Being Attacked by IS Admits Inventing Story 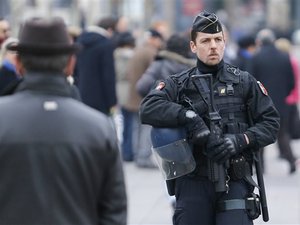 A French nursery school teacher who claimed on Monday he was stabbed in his classroom by an Islamic State supporter has admitted to prosecutors that he invented the story.

The 45-year-old teacher at a school in Aubervilliers, northeast of Paris, was hospitalized with light stab wounds in his side and throat.

He had earlier claimed that a man in overalls and a balaclava had arrived while he was preparing his class on Monday, grabbed a box cutter and scissors that were in the room, and attacked him.

The teacher further claimed that the man shouted: "This is Daesh. This is a warning." Daesh is another name for IS.

Prosecutors said they were still questioning the teacher, whose injuries were not considered life-threatening, over why he lied.

With France on edge a month on from attacks in Paris, and with the IS calling for attacks on French schools, the investigation had been immediately taken over by anti-terrorism prosecutors.

The case even prompted a visit by Education Minister Najat Vallaud-Belkacem, who vowed to boost security at France's schools.

The teacher was said to have worked at the school for 20 years, and was "appreciated," according to the town mayor Pascal Beaudet.

He was described by one parent, Nadia Perez, as "very involved in the life of the school."

"He was a personality at the school," she added. "But he could be fairly tough on the kids. He did not tolerate them being impolite."

The Islamic State's French-language magazine Dar-al-Islam called in its November edition for its followers to kill teachers in the French education system, describing them as "enemies of Allah."

"This education, in the case of France in particular, is a means of propaganda used to impose the corrupt way of thought established by the Judeo-masonry," it said.

"Muslims must know the French education system is built against religion and Islam, as the only religion of truth, cannot cohabit with this fanatic secularism."

Last month's attacks by IS in Paris, that left 130 dead, saw France impose a three-month state of emergency and led to a Europe-wide manhunt for suspects.

"We will continue to reinforce security measures at schools in a context where schools feel threatened," said Vallaud-Belkacem on Monday.

"We have received many calls from colleagues, who are very worried. They don't necessarily think there will be an organized attack, but they fear this message of murderous madness will inspire unstable people to action," she said.

In March 2012 jihadist Mohamed Merah killed three children and a teacher outside a Jewish school in southwestern France in attacks which also saw him kill three soldiers.

No worries, just terrorist and his IceNorMan passing their honeymoon vacation in Paris, all fees paid by their collegues from ISIS