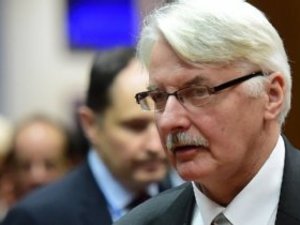 Poland's foreign minister on Tuesday accused Germany of putting Russia's interests above the security of eastern Europe, saying Berlin had neglected to show solidarity with its neighbors.

Retorting sharply to accusations against Warsaw over its refusal to shoulder a bigger share of refugees streaming into Europe, Witold Waszczykowski instead questioned Germany's stance on eastern Europe.

"When did Germany allow Polish citizens to work in Germany after we joined the EU in 2004? After seven years. Why did no one speak of a lack of solidarity then?

"Today Germany is taking in one million Syrians, no problem, people from another continent," he told the Berliner Zeitung in an interview published Tuesday.

"Poland joined NATO in 1999, but until today, the Alliance has stationed no unit in Poland or in central Europe. The reason is because Germany cares more for the interests of Russia than the security interests of central-eastern Europe.

"We should therefore ask the Germans: where is your solidarity with regards to your neighboring partner?" said the foreign minister.

Relations between Berlin and Warsaw have been strained after the conservative Law and Justice party returned to power in Poland in late October.

The euroskeptic party has said it would financially support EU efforts to tackle the refugee crisis, but has made it clear Poland would not take in asylum seekers.

The stance has put it on a collision course with Germany, which is set to record one million asylum-seeker arrivals this year -- the largest group among them coming from Syria, and has called on all EU members to accept their fair share of refugees.

Warsaw was also irked when European Parliament president Martin Schulz on Monday compared the political situation in Poland to a "coup".

The latest political tensions in Poland center around efforts by the ruling party to install five judges of its own choosing at the 15-member constitutional court, having earlier swiftly replaced the country's secret services chiefs.