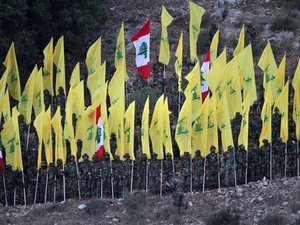 Hizbullah is expected to announce on Thursday its stance on Lebanon joining the Islamic alliance that was declared by Saudi Arabia earlier this week, reported An Nahar daily on Wednesday.

Sources close to the party told the daily: “The prime minister cannot take such a major decision without turning to cabinet first.”

Hizbullah will likely announce its stance following the weekly meeting of its Loyalty to the Resistance parliamentary bloc.

Premier Tammam Salam had made a preliminary approval for Lebanon to join the alliance, in a move that surprised political powers in Lebanon that said that they were not informed of his step.

“We do not know what sort of responsibilities joining the alliance would require from Lebanon,” added the sources.

“We also do not know whether the alliance takes the form of an international treaty. In such a case, then parliament would have to look into the issue, because it is part of its jurisdiction,” they explained.

Saudi Arabia announced on Tuesday the formation of the Islamic alliance aimed at combating terrorism.

It includes 35 countries from across the Muslim and Arab world, except Syria, Iraq, and Iran.

The sectarian militia claims its fighting terrorism but objects to Lebanon joining a coalition to fight terrorism.

don't forget their war in yemen, bahrain, iraq and several other places. These people have no common sense and are blinded by sectarian hate.

so well said so well articulated. No matter which alias you use you always make sense.

Whether you like him or not, Erdogan is a democratically elected president by the people of Turkey with 51.4% absolute majority in a clean and transparent election which hardly qualifies for a dictatorship.

Ebola alone has to decide!!!!

You have divided the country and pursuing its destruction!!!

The picture up shows more yellow than cedar...we can't call this nationalist, can we?

Bravo PM Salam u must take decision by its eggs...It's only preliminary.........

Bravo PM Salam u must take decisions by its eggs...It's only preliminary.........

Tamam Salam believes he is a President, so he can do whatever he wants without cabinet approval.

I guess we have all been to nice to him, and he took advantage of that.

Wrong Mystic, HA believes they are the President, the constitution, the army, ...EVERYTHING.
When President Sleiman declared non-intervention in Syria (with approval from the whole Government) HA went ahead sent its militia ..... HA is only concerned about HA not Lebanon.

It will not be accepted by March 8 most of the cabinet.
The Resistance will not allow the country they protect, to fall into Wahabi hands, Salam dealt his last card.

Now he is out of options.

Be careful Salam, a hizbollah car bomb is waiting for you...

the hell with the cabinet . Do whatever it takes to run this country Salam and don't listen to the Syrian regime puppets

Use your clowns that you have sent to Syria to fight for lebanon , in the name of lebanon instead of fighting for Iran and Syria

If you don't have a pea for a brain , you would realise that it is in lebanon's strategic interest to align with this coalition ! but no , we have morons with no sense of nationalism or strategic vision in their sick mind

that´s why Lebanon Army don´t atack and promoted advance of the Daesh in Arsal! Salam and Hariri defends that Lebanon participate in the same militar coligation that take control of Arsal, with headquarters in Mecca!!!

You are participating in order to join a needed world coalition and to protect your regional and local interests . If i am going to need and sit down and teach you politics , then maybe you should be surfing through kiddie websites ....now go and play ghanooj

And did Hezbollah consult the Council of Ministers or anyone else before intervening militarily in the Syrian War??
Where do these guys get off on making THIS complaint??

They could care less about Lebanon let alone the constitution.

I don't care for this Saudi alliance, but if the Filthy murdering militia is against it, then by all means we must join.