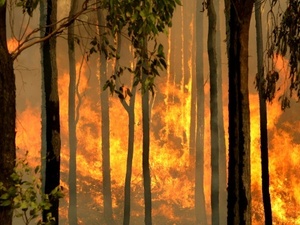 Up to 15 homes have been destroyed by bushfires near Melbourne but cooler conditions Monday aided crews battling them to get the upper hand, officials said.

A number of blazes ignited over the weekend, whipped up by strong winds and searing heat, and they quickly ran out of control.

One of the fires at Scotsburn, 90 kilometers (55 miles) west of Melbourne, surprised crews with its speed and ferocity with the Australian Broadcasting Corporation reporting Monday it razed 12 homes.

Another blaze at Barnawartha, also in Victoria state, burnt through about 9,000 hectares (22,200 acres), destroying three properties.

The Country Fire Authority said the Scotsburn blaze was now under control while those centered around Barnawartha would likely be contained by the end of the day.

"What we've got is fairly stable weather patterns for the rest of the week," CFA official James Todd said.

"We'll have cooler weather and more light breezes, with a lot less chance of fires starting from natural events."

The small farming community of Scotsburn was still coming to terms with the destruction of homes and livelihoods, with Shane and Vicki Donovan's home burnt to the ground.

"We grabbed what we could, put it in the car and fled," Shane Donovan told Sky News. "The roof was caved in. You could see the chimney from the inside."

Seven people have died so far this year from bushfires across the country.