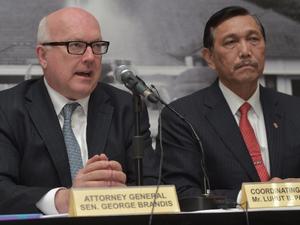 The Islamic State group is working to boost its presence in Indonesia with dreams of creating a "distant caliphate" in the world's most populous Muslim-majority country, Australia warned on Tuesday.

Attorney-General George Brandis, who spent Monday in meetings between Indonesian and Australian ministers, police chiefs and security officials, said it constituted a threat to Australian and Western interests.

"ISIS has ambitions to elevate its presence and level of activity in Indonesia, either directly or through surrogates," he told The Australian newspaper, referring to the jihadist group by another acronym.

"ISIS has a declared intention to establish caliphates beyond the Middle East, provincial caliphates in effect. It has identified Indonesia as a location of its ambitions."

Islamic State, which adheres to a fundamentalist doctrine of Sunni Islam, has already declared caliphates in several areas outside Syria and northern Iraq where it holds a swathe of territory.

Three-day raids across Java ending Sunday saw the confiscation of explosive materials and an IS-inspired flag as well as nine arrests.

Security has been beefed up across the country, with senior ministers from Australia and Indonesia agreeing on Monday to boost intelligence sharing, including on terrorism financing, following bilateral talks in both Sydney and Jakarta.

The Australian newspaper said that while Australian authorities believed there was little chance IS could create a caliphate within Indonesia, they were deeply worried the terror group may establish a permanent foothold in the archipelago.

This could allow it to conduct attacks against Western or Australian interests within Indonesia and beyond.

Justice Minister Michael Keenan said the rise of jihadist groups had destabilized the security of both countries.

Indonesia, the world's most populous Muslim-majority country, suffered several major bomb attacks by Islamic radicals between 2000 and 2009, including the 2002 Bali bombings that killed 202 people.

A crackdown has weakened the most dangerous extremist networks although the emergence of IS has sparked alarm that Indonesians returning from battlefields in the Middle East could revive them.

Australia is equally concerned at the threat from those being radicalized.

Six attacks in Australia have been foiled over the past year, according to the government, but several have not, most recently in October when a police employee was shot dead by a 15-year-old reportedly shouting religious slogans.