Naval Base a Terror Target as Two Arrested in Australia Operation 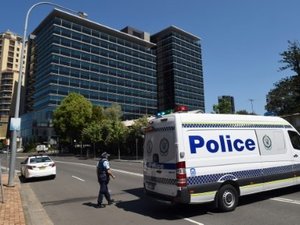 Two men were arrested on Wednesday during a counter-terrorism operation in Sydney, with a key Australian naval base among locations they were allegedly targeting, police said.

Their detention comes just weeks after five people were held over a plot aimed at an Australian government building.

Following the latest raids, Abdullah Salihy, 24, was charged with making a document likely to facilitate a terrorist attack while Mohammad Almaouie, 20, was accused of conspiracy to "do an act in preparation to commit a terrorist act".

Both were refused bail.

Their arrests are part of Appleby, a rolling operation investigating people suspected of being involved in domestic acts of terrorism, Australians fighting in Syria and Iraq and the funding of terrorist organizations.

So far, 11 other people have been charged with terror-related offenses since Appleby was set up last year.

New South Wales police Deputy Commissioner Catherine Burn said the latest arrests related to evidence gathered late last year when 15 people were taken into custody and an alleged plan to kidnap and behead a member of the public was uncovered.

"I do need to stress that this activity today relates to events of last year, it relates to documents and other material seized in search warrants last year," she said.

There was no specific threat but the Garden Island naval base on Sydney Harbour, close to the Opera House, was among locations mentioned.

"We will allege in their planning that they mentioned a few locations. We are aware and we will allege that the Woolloomooloo navy base was one of those locations," Burn said.

She added that "what we will be saying is that there was a group of people who came together with the idea, with the intent to do something, and they started to make preparations to carry out a terrorist act".

Despite this, she stressed that there was "no current threat, there is no pending threat".

Police have been focusing on a group of about 20 young men who they claim are committed to carrying out a terrorist attack in Australia.

Burn said the 20-year-old arrested Wednesday was associated with the five men, including a 15-year-old boy, charged earlier this month over a plot targeting a government building, which also stemmed from evidence uncovered last year.

Authorities have been on high alert for potential attacks since last year. Canberra has since introduced new national security laws and conducted a string of counter-terrorism raids.

Six attacks in Australia have been foiled over the past year, according to the government, but several have taken place, including the terror-linked murder of police employee Curtis Cheng in October.