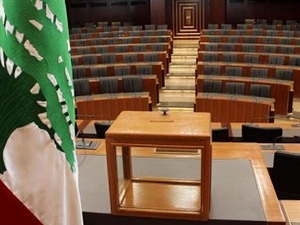 The 34th session to elect a president has been postponed on Thursday due to the lack of quorum at parliament.

MP Marwan Hamadeh said after failed elections: “The number of lawmakers present at the failed session reflects the pessimism over the possibility to elect a head of state.”

MTV said that some 36 MPs were present at parliament.

“Neither the local nor regional conditions indicate that a president will be elected any time soon,” added Hamadeh.

He noted that the deterioration of ties between Saudi Arabia and Iran will negatively impact the chance to elect a president in Lebanon.

Telecommunications Minister Butros Harb meanwhile condemned the ongoing failure to elect a president, saying: “We can no longer continue in such a manner.”

“We cannot claim to love this country and then treat it in such a way,” he said.

“We will continue to attend these electoral sessions, because we have a duty to fulfill. We hope other officials will also assume these responsibilities,” he stressed.

“They should realize that they should perform these duties in wake of the explosive regional developments,” remarked the minister, while warning that Lebanon will be “on the brink of collapse if this situation persists.”

Tensions between the two regional powers dipped to a new low after the kingdom executed prominent Shiite cleric Sheikh Nimr al-Nimr over the weekend.

The development saw the severing of ties between the two sides.

Lebanon has been without a president since May 2014 when the term of Michel Suleiman ended without the election of a successor due to ongoing disputes between the March 8 and 14 camps over a compromise candidate.

No, that is the worse possible option.
The people need to stop electing the same criminals to Parliament. The unfortunate thing is that they tailor the electoral law each time to guarantee they are re-elected, and so, it's so difficult to change them.
What we do need is an independant electoral convention to draw up a new electoral law that would be fixed, and not changed each time there is an election.