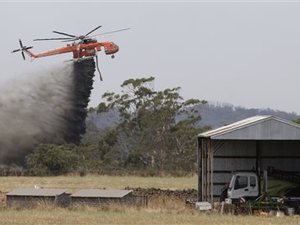 Two people have died and more than a hundred homes have been destroyed in a huge bushfire, Australian authorities said Sunday, as firefighters battled to tame the out-of-control blaze.

The inferno -- which has razed about 71,000 hectares (175,000 acres) in Western Australia state -- is the most recent in a series of bushfires that have kicked off a hot summer season, with the latest deaths lifting the national toll to eight.

The two bodies were found in burnt-out houses in Yarloop, a historic mill town some 110 kilometers (70 miles) south of Perth that has been devastated by the bushfire -- one of the worst to hit the region in recent years.

The bodies are believed to be those of two missing men aged 73 and 77, Western Australia Police told AFP.

"It's just another day of catastrophe, isn't it?" Tania Jackson, the head of the regional council, told the Australian Broadcasting Corporation after news of the men's deaths.

"Each day that has gone by seems to bring worse news. It's devastating."

The bushfire -- which is entering its fifth day after reportedly being started by a lightning strike -- has destroyed 143 properties, including 128 homes in Yarloop, the state's Department of Fire and Emergency Services (DFES) told AFP.

Some 250 firefighters are fighting the blaze, which has a perimeter of about 226 kilometers, and authorities said Sunday afternoon that it was "contained" within the fire zone, but not yet under control, amid cooler weather on Sunday.

"Overnight and today, favorable conditions came in and it's a lot cooler here today and that has allowed firefighters to gain more ground on the fire and to increase containment lines," a DFES spokeswoman told AFP.

DFES said several towns in the region remained under threat.

"Unless you are ready and prepared to actively defend your property, evacuate to the south via the South Western Highway if safe to do so," it said in an emergency warning.

Western Australia's state premier Colin Barnett said the event had been declared a natural disaster, a measure that gives residents access to greater financial support, adding that the "damage bill is going to be very significant".

Yarloop residents spoke of how the bushfire tore through their town in just seven minutes, as aerial footage showed blackened ground, burnt-out shells of vehicles and houses reduced to brick fireplaces.

"During the day, the hills were very dark and smoking," dairy farmer Joe Angi told the ABC on Saturday.

"But the wind picked up just on dark and she's just come down from the hills, straight down, flat out. It was tumbling over itself like a wave of fire."

Bushfires are common in Australia's hotter months, with four deaths in Western Australia in November. Another two people perished in neighboring South Australia state in the same month.

DFES commissioner Wayne Gregson warned that the worst of the bushfire season was yet to come.

"There is still another 10 or more weeks to go in what is predicted to be a difficult bushfire season," Gregson told Perth's Sunday Times newspaper.

"Late January to early February is traditionally the most intense summer period, when we can experience hot weather with dry winds and seasonal lightning."

Australia's worst firestorm in recent years devastated parts of the southern state of Victoria in 2009, destroying thousands of homes and killing 173 people.