Geagea: Hizbullah Will Lose Aoun as Ally if it Fails to Elect him as President 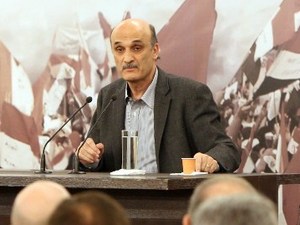 He told the station: “The party will lose its ally, Aoun, if it fails to vote for him as president.”

“Hizbullah's failure to endorse Aoun's nomination will have major repercussions,” he predicted, while revealing that he does not have direct contacts with the party.

“The ongoing presidential vacuum pushed us to nominate Aoun for president,” Geagea explained of the meeting that was held at Maarab on Monday with his long-time rival.

“I sought, behind closed doors, to include all possible guarantees in the Maarab meeting. I believe that the greatest guarantees however were broadcast to the whole world when the agreement was declared,” continued Geagea.

Asked if he can guarantee that Aoun will remain committed to the agreement, he replied: “Those who do not see issues from a flexible perspective will not be able to progress in life.”

Addressing his ties with Mustaqbal Movement leader MP Saad Hariri, he said: “I haven't held talks with him in a long time.”

“I spoke to him around the time he nominated Marada Movement chief MP Suleiman Franjieh as president and then once after that,” he revealed.

“My ties with Hariri are not at their best due to the developments over the presidency. I will try my best to improve them,” Geagea stressed.

Hariri nominated Franjieh as president in late 2015 even though Geagea, his ally in the March 14 camp, was also a nominee.

This led to tensions between the Mustaqbal Movement and LF.

Franjieh declared in wake of the Maarab meeting that he was still running for the presidency.

The Democratic Gathering on Thursday stated that its candidate Henri Helou is also still in the running.

The next electoral session is scheduled for February 2.

Geagea is indeed showing his true patriotism by putting his countrys needs ahead of his own. And now he is playing the political game perfectly by following what he believe is a liar (Hezbollah) to the door: You said you supported Aoun, Sayyed Nasrllah, now go ahead and show it"

Aoun's game is to be the only candidate. He is asking Hezbollah to convince Franjieh to withdraw. Aoun does not want a democratic competition in parliament. He is a militant at heart and conviction.

Smart move by Hariri and Geagea. This was their plan from the beginning, to split and expose March 8.

Hezbollah will back Aoun all right, but will wink to Berri not to do so. Result? No president for another year or two. Geagea made the right move in nominating Aoun, so did Hariri nominating Franjieh. It wouldn't have worked any better for M14 even if that was not a skillful double maneuver to split both Christian leaders away from Hezbollah. Or may be was it?

Although so far the Hizb hasn't cast, not even one vote for "their #1 ally", not one!! Lmaooooo haram Aoun, the Hizb keeps claiming they support him their #1 ally while they keep refusing to put the needed pressure on their M8 subordinates and Jumblat just like they did on 24 January 2011 pushing them to go to parliament and elect him, hell even Mikati got more respect not just lip service.
Remember how the Hezb slighted "their #1 ally" when Aoun attempted to return the traditional Christian post of General Security head, stolen by the Syrian occupation, to the rightful owner. Aoun could not appoint his own Christian candidate even with ten ministers. They now keep stalling and refusing to go elect "their #1 ally" to the only Christian presidential seat in the whole region, even after his own opponent nominated him.

What's the matter sweetheart having trouble understanding the complicated factual logic of grownups? Too much for your inherently damaged Dahieh brain of yours to comprehend? Let me try to explain it to you in a language you'd understand. Hizballsê not wánting to elêctending Great General Cristhian Aoun, el Presidente of Lebanon. They telled Cristhian General Aoun thay suppórteding khim for el President Cristhian of Lebanon und Suprême Cristhian Comandant of Lebaneser Armie but will not go vótting for khim, undersnderning?
I've been stydyinging Dahieh português very good much to bê ábel to commiuounicáte with you more better sweety.. sorry i mean sweaty :)