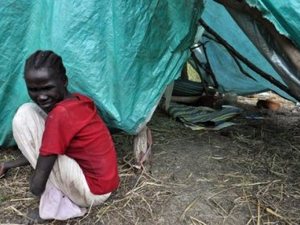 The U.N. human rights chief on Friday condemned a deadly air strike on a refugee camp in South Sudan, saying the attack could amount to an international crime.

"We condemn the bombing. It's an extremely serious matter and could amount to an international crime," spokesman Rupert Colville told journalists.

"We need more information about exactly what happened and who carried out the bombing," he added.

South Sudan has accused Khartoum of carrying out the strike on a refugee camp in Yida town in Unity State on Thursday, which a local official said killed 12 people and injured more than 20.

Just hours before the reported raids, South Sudan's President Salva Kiir accused his northern counterpart Omar al-Bashir of trying to drag the new country back to war and seize its oil fields.

The U.N. refugee agency said Friday that several bombs dropped by an aircraft hit the camp sheltering more than 20,000 refugees who fled violence in the Nuba Mountains of Sudan's Southern Kordofan state.

Condemning the attack, UNHCR spokesman Adrian Edwards said: "Two of the bombs fell within the Yida camp, including one close to the school.

"Fortunately there were no casualties in the camp and we are verifying the situation of surrounding communities."

The spokesman did not explicitly state who was behind the attack, saying that the agency had seen the statements of both governments, while telling journalists: "You will have to look to see who has the capacity to carry out the bombing."

Miabek Lang, commissioner of Pariang County in Unity State, said Thursday it was the Sudan Armed Forces which targeted Yida. But this was denied as "completely false" by SAF spokesman Sawarmi Khaled Saad.

"We didn't bomb any camps or any areas inside the borders of South Sudan," Saad told AFP.

Tens of thousands of civilians have fled across Sudan's poorly defined border with the newly independent south to escape the fighting in the Blue Nile border area and nearby South Kordofan.

"UNHCR is concerned by the escalating tensions in the border areas between Sudan and South Sudan where hundreds of thousands of civilians have been uprooted since June as a result of fighting," Edwards said.

Sudan last week lodged a complaint against South Sudan, accusing it of funding the SPLM-North rebels who fought alongside the south's ruling SPLM during its 1983-2005 war with Khartoum.