Jumblat Applauds 'Iran's Democracy,' Wonders if it Will Allow Lebanese Elections to Be Held 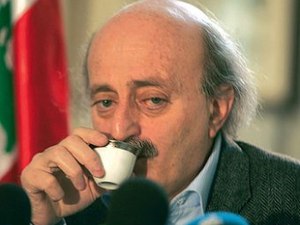 Progressive Socialist Party leader MP Walid Jumblat expressed on Wednesday “admiration with the democracy in Iran,” citing the recent exclusion of the grandson of Ayatollah Ruhollah Khomeini, founder of the Islamic Republic of Iran, from contesting elections next month.

The MP said via Twitter: “Given its 'democratic' record, perhaps Iran does not want the election of any MPs Henri Helou, Suleiman Franjieh, or Michel Aoun as president.”

“It is strange that Khomeini's son is unwanted, but this is democracy in its highest form in the Islamic Republic,” he added sarcastically.

“At this rate, what is the authority that chooses – pardon, I mean elects - the president in Lebanon?” wondered the MP.

Perhaps it does not want to elect any of the Lebanese candidates, he noted, “but this is also a democratic choice based on the Iranian way.”

Hassan Khomeini, a 43-year-old cleric with close ties to reformists, was not verified as having sufficient religious competence by the Guardian Council, his son Ahmad said on his Instagram account, despite "testimony from dozens of religious authorities".

Khomeini had hoped to be a candidate for election to the Assembly of Experts, a powerful group of clerics which monitors the work of Iran's current supreme leader, Ayatollah Ali Khamenei, and will be responsible for selecting his successor.

Jumblat continued: “I stipulated that the president should not be a state employee, meaning that the army commander has been ruled out and he doesn't even want the post.”

“The Democratic Gathering reminded the public last week that Helou enjoys Christian and national credibility. They were not impressed by this, but this is our democratic opinion,” he tweeted.

“It seems however some characteristics are still missing, which means that a president will not be elected at the moment. I don't know what this missing factor is,” he remarked.

“At any rate, it appears that Lebanon's national dialogue has started to resemble Iran's council for diagnosing the regime,” the lawmaker said of the talks that were held at Speaker Nabih Berri's Ain el-Tineh residence in his absence.

“The password to ending the presidential impasse is in the hands of Iran's Supreme Leader Ayatollah Ali Khamenei,” he added sarcastically.

Some of the MP's Twitter followers criticized his absence from the dialogue table, asking him “if his failure to attend was also a form of democracy.”

Lebanon has been without a head of state since the term of President Michel Suleiman ended in May 2014.

A number of officials have said that any progress in ending the deadlock hinges on a breakthrough in regional developments.

Jumbalah, is Iranian!!??? Like Iran and Saudis, are boycotting the Cristhian Presidence!!

who are these Cristhians you keep referring to?

Had the criticism of Iran come from someone other than Jumblatt, it would carry some credence. This man changes his colors with seasons.

Regardless their level of governance and system, whether I agree or not, the council of expert is a highly religious position and the have strict guidelines.

At least, the do have elections, they did clear over 118 other candidates. btw, the current president is a reformist, few other reformist are part of the existing council. at least, they are not doing a favour cause he is the son of khomeini.
Walid versus Tayymur.
Amine versus Sami
luckly samir does not have a son
Berri..oufff...not sure his son is even interested from his firsat wife unless Randa is grooming hers.
franjieh
karameh
ouff, i forgot the Hariri
and the lis go on

the have the worst system but they are not corrupt and they work for their country not for others.

Jumblatt is of course correct. The Lebanese President will be "selected" in Tehran and in Riyadh. The consensus candidate in those capitals will be rubber stamped by the now expired Lebanese Parliament. The fiction is that there is a Lebanese State. A State requires State institutions, a constitution, constitutional officers and the like.

Lebanon has a Constitution which is routinely ignored. It has constitutional officers who are actually clan or militia chieftains dressed up as government officials. They identify more with their religion or their tribe than with the nation.

This is the façade, the image of a Lebanese State. But it is not the reality. The reality is that Lebanon is an outpost for other regional states. Will it be an Iranian Shia outpost, or a Saudi Sunni outpost. This is the question only. Since even the Christians have caste their lot with either Sunni or Shia, the identity of the Christian president will be sign of which side, Sunni or Shia is in regional ascendency. It is a contest for which there are no rules.

It is a contest in which Lebanon is the football because its political class has made Lebanon the regional football to be kicked up and down the field, possessed by one side or the other, but never to be a Lebanese State in its own right.

And since this Lebanese political class is blindly supported by the resident Lebanese people who for some reason do not punish their political class for having mortgaged the country's sovereignty, then the people are getting precisely that for which they have bargained. Until the people change, the political class will not change. Grow up Lebanese. Grow out of your serfdom and that will end your feudal system. Become a citizen, become citizens and then you will have independence as a State.

Jumbo: when will you stop having a coward attitude...???