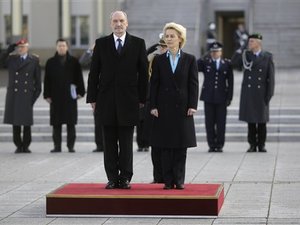 Poland's defense minister said on Thursday that NATO's presence must be boosted in eastern Europe to counter the threat posed by Russia.

For Poland, "strengthening the eastern flank of NATO is a priority," Antoni Macierewicz said during a meeting with his German counterpart Ursula von der Leyen in Berlin.

"The issue of Russian aggression in Ukraine remains a very important issue" for Poland, he added, speaking as Warsaw prepares to host a NATO summit in July.

Poland has led demands for a permanent NATO presence in the former communist states once ruled from Moscow, but the alliance has been cautious for fear of being accused by Russia of breaching key treaties ending the Cold War.

These agreements ban NATO from setting up permanent military bases in eastern Europe but do allow the alliance to hold exercises and rotate limited forces through the area.

Polish Prime Minister Beata Szydlo is due to visit Berlin on February 12.

Von der Leyen said July's NATO summit would "show that the alliance, given the changing security situation, must be able to act in a more agile, more flexible and faster way".

Since the Ukraine conflict, NATO has established a high-speed response force with forward command and logistic centers in its eastern members. NATO says these forces are very small and cannot be considered bases.