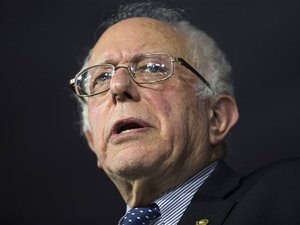 All eyes in the sleepy Polish town of Slopnice were fixed on the U.S. presidential race Tuesday as Bernie Sanders, whose father was born there, was in a virtual tie with frontrunner Hillary Clinton for the Democratic party nomination.

"There's quite a bit of excitement in the air here -- we're proud of Senator Sanders and we wish our 'homeboy' even greater success!" mayor Adam Soltys told AFP.

Soltys met Sanders and his brother in 2013 when they visited the picturesque town of 6,500 nestled in the foothills of the Carpathian mountains. They were retracing the footsteps of their father Eli, before he emigrated to the United States in 1921 at the age of 17.

"He even speaks a few words of Polish," Soltys said, describing Sanders as "very sympathetic, warm-hearted and friendly".

"After a couple hours, it felt like we were old friends," Soltys said of the 74-year-old Vermont senator, described as being serious, sometimes even grumpy.

"We managed to find the house where Sanders's father lived," the mayor added.

Soltys said that members of the Sanders family, who were Jewish shopkeepers, died in the Holocaust.

A self-proclaimed democratic socialist preaching political revolution, Sanders stunned many observers Tuesday as he clinched a virtual tie with Clinton in the first vote in Iowa in the race to become the Democratic candidate for U.S. president.