Daryan on Hariri Murder Anniversary: Your Son Has Followed in your Footsteps of Preserving Peace 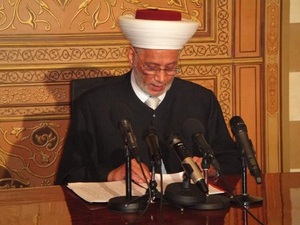 Grand Mufti Sheikh Abdul Latif Daryan lamented on Saturday the current state of affairs in Lebanon, vowing that the Lebanese people will persevere against challenges.

He said on the eleventh anniversary of the assassination of former Prime Minister Rafik Hariri: “Your son Saad has followed in your footsteps in maintaining civil peace and stability.”

“It is as if the assassins wanted to kill along with Hariri the idea of coexistence and a Lebanese state,” he continued after paying his respects to the slain premier at his grave in downtown Beirut.

Hariri was killed for the sake of the nation and its security, he said, while quoting the former PM's saying that “no one is greater than their nation.”

“A country that deserves the sacrifices of Hariri is a great nation indeed,” Daryan added.

Addressing Hariri, he remarked: “You have given politicians a hard task of following in your footsteps.”

“It is unfortunate that history does not repeat itself however and as in every year, we have very little good news to report to you,” continued the mufti.

“The state that you pledged to build is paralyzed and state institutions are crippled,” he noted.

“You successor Saad however is determined to follow in your footsteps. He is keen on civil peace and security and on making sacrifices to ensure that work is restored at state institutions.” he stressed.

“With Saad Hariri and his movement, there is a large segment of Lebanese who do not wish to abandon their country,” said Daryan.

Rafik Hariri was assassinated in a major car bombing in Beirut on February 14, 2005.

A number of Hizbullah operatives have been indicted in the crime and the Special Tribunal for Lebanon has been set up to try them.

None of the suspects have been arrested and they are being tried in absentia.

“Your son Saad has followed in your footsteps in maintaining civil peace and stability.”

really? Being spineless does not equate with maintaining peace and stability.

they are not powerless. Do you confront a thug holding a gun to your head with a smile. I am sure you agree the answer is NO. Hariri had 11 years to prepare so did Geagea.

"Daryan on Hariri Murder Anniversary: Your Son Has Followed in your Footsteps of Preserving Peace"
.
yes, preserving the peace...supporting the destabilization of Syria...support the perseguitions to arab cristhians...support the stollen political powers to the Cristhians...put 1,5 millions of meccas in Lebanon....your son Hariri is...

Please Sheikh, Hariri has been a coward who recently back flipped for sake of his financial interests.

Shame to say this but it is the truth