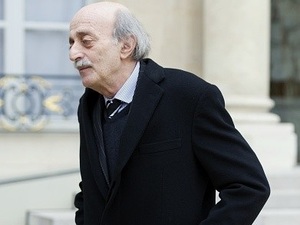 Progressive Socialist Party leader MP Walid Jumblat is expected to travel to France in the upcoming days where he is set to meet President Francois Hollande, reported the pan-Arab daily al-Hayat on Sunday.

It said that he is scheduled to hold talks with the French leader on Wednesday at the Elysee Palace in Paris.

Discussions are set to tackle the latest Lebanese developments in wake of Saudi Arabia's decision to halt a grant to the army in protest against Hizbullah's virulent criticism of the kingdom and Foreign Minister Jebran Bassil's abstention from voting in favor of Arab League resolutions condemning attacks against the Saudi embassy in Iran in January.

Saudi Crown Prince Mohammed bin Nayef had paid a visit to France this week to address Lebanon and the Syrian conflict.

He explained to various French officials Saudi Arabia's motives for taking its measures against Beirut, including issuing a travel advisory to its citizens.

Gulf states had also issued similar warnings to their citizens before blacklisting Hizbullah as a terrorist state over its actions in Syria and Yemen.