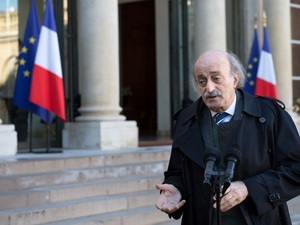 Foreign Minister Jean-March Ayrault is also expected to be present at the meeting.

Discussions are focusing on the situation in Lebanon, the stalled presidential elections, and Saudi Arabia's freeze of an aid grant to the Lebanese army.

In February, Riyadh halted a grant to the army in protest against Hizbullah's virulent criticism of the kingdom and Foreign Minister Jebran Bassil's abstention from voting in favor of Arab League resolutions condemning attacks against the Saudi embassy in Iran in January.

The kingdom urged its citizens against traveling to Lebanon.

I hope he took a box of Kleenex with him. What good is crying like a baby to Hollande?

Where are the men politicians?