Presidential Vacuum at Center of Talks between Jumblat, Hollande in Paris 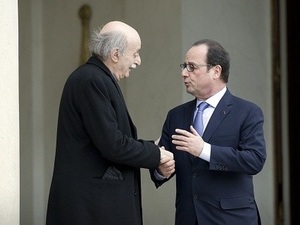 Discussions tackled the latest developments in Lebanon with French officials stressing their support for the Lebanese army and institutions, as well as the need to elect a president “without delay.”

Jumblat for his part focused on the need to elect a head of state, while the economic and financial situations in Lebanon should be taken into consideration.

Key to resolving the crisis in the country lies in electing a president, he explained according to An Nahar.

“France cannot take the role of Lebanon in any presidential initiative,” remarked the MP.

Talks with Ayrault addressed the regional situation and the Syrian crisis that is destabilizing Lebanon, added the daily.

The French official stressed the need to provide more support to Lebanon in light of the international meeting on Syria that was held in London in February.

Lebanon has been without a president since the term of Michel Suleiman ended in May 2014 without the election of a successor.

Ongoing disputes between the March 8 and 14 camps have thwarted the polls.

Earlier this year, Hizbullah announced that it would boycott electoral sessions unless it has guarantees that its candidate Change and Reform bloc leader MP Michel Aoun will be elected president.

The Caporal has destroyed Lebanon's economy.