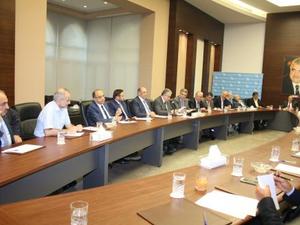 The Mustaqbal parliamentary bloc condemned on Tuesday Hizbullah chief Sayyed Hassan Nasrallah's ongoing criticism of Saudi Arabia and Arab countries, while warning of the repercussions of the prolonged vacuum in the presidency.

It said in a statement after its weekly meeting: “Hizbullah and Nasrallah's persistent attacks against the kingdom and Arab countries undermine the interests of the Lebanese people, as well as their stability and source of income.”

It accused Nasrallah of fabricating claims against Saudi Arabia, Arab countries, and the Gulf Cooperation Council, adding that the Lebanese people “are facing problems because of the consequences of Hizbullah's involvement in the conflict in Syria and other Arab countries.”

On Monday, Nasrallah accused Saudi Arabia of blocking any “political solution” to the Syrian conflict, adding that he does not expect progress on the political track.

“Its schemes in Syria, Iraq and Yemen have failed,” he said of Riyadh.

Hizbullah has repeatedly held Saudi Arabia responsible for the unrest in Syria and Yemen.

In wake of the party's virulent stances, the kingdom halted an aid grant to the Lebanese army and issued a travel advisory against Lebanon.

The GCC and Arab Leagues recently labeled Hizbullah as terrorist and a number of Gulf countries have started deporting party supporters.

Addressing the presidential vacuum, the Mustaqbal bloc said that Hizbullah and the Free Patriotic Movement's boycott of the polls will lead to further “fragmentation of the Lebanese state.”

“The vacuum is exposing the state to more crises, which are revealing its weaknesses,” it warned.

These weaknesses include the recent trash disposal crisis, the dispute over the safety of wheat in Lebanon, and the uncovering of an illegal internet network, the bloc explained.

Disputes between the rival March 8 and 14 camps are hindering the polls.

Hizbullah announced that it will boycott the elections until it receives guarantees that its candidate FPM founder MP Michel Aoun will be elected head of state.

Ebola supporters are traitors to Lebanon, but not to Iran since they are working hard to bring Lebanon to become part of the Islamic Republic.
They believe they are going to succeed. But they won't. All they are doing is destroying Lebanon which is a beautiful country...MUCH MORE BEAUTIFUL than their Iran..

So Hezbollah will boycott the elections until its choice is guaranteed to be elected. And they called this a majoritarian republic? If you can't win your vote, then you close down government??? No evidence yet of a Republic in Lebanon. It is a tribal confederation dressed up to look like a Constitutional Republic.