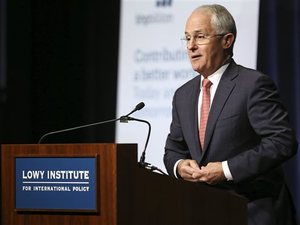 Australian Prime Minister Malcolm Turnbull said Wednesday that Europe had "allowed security to slip", as he questioned the EU's Schengen passport-free zone in the wake of the Brussels attacks.

Security at Australia's major airports, including Sydney, Melbourne and Canberra, was increased in the wake of the European attacks, police said.

Turnbull said that while it was up to Europe to set its policies, his nation's border protection measures and domestic security arrangements "are much stronger than they are in Europe, where regrettably they allowed security to slip".

"That weakness in European security is not unrelated to the problems they've been having in recent times," he told the Australian Broadcasting Corporation, alluding to the wave of migrants who have flooded into the continent, many of them from Syria.

Turnbull added that the open-borders Schengen travel regime, which covers 26 European countries, meant "people are able to freely travel across borders within Europe -- that poses security challenges, coupled with clearly very porous external borders as we've seen plenty of evidence of that".

"My point really was to say that those arrangements have security consequences," he told reporters in Sydney.

The Schengen agreement, considered a symbol of European unity and prosperity, has been under scrutiny amid the unprecedented influx of migrants, and revelations that some of the jihadists in November's Paris attacks which killed 130 people came from Belgium.

Both the Brussels and Paris attacks were claimed by the Islamic State group.

Turnbull added that intelligence showed IS was "using the refugee crisis to send operatives into Europe".

"Brussels are an unfortunate reminder of how violent Islamist extremism appears to have reached a crisis point in Europe," he said in a foreign policy speech late Wednesday.

"European governments are confronted by a perfect storm of failed or neglected integration, foreign fighters returning from Iraq and Syria, porous borders and intelligence and security apparatus struggling to keep pace with the scope and breadth of the threat."

Two of the suicide bombers involved in the Paris attack were found with fake Syrian passports and several crossed into Europe posing as refugees.

Canberra has been increasingly concerned about home-grown extremism and the flow of Australians traveling to the Middle East to fight with jihadist organizations such as IS in Iraq and Syria.

Up to 49 Australians have been killed in the conflict in Iraq and Syria, with some 110 currently fighting or working with militant groups, Australia's domestic spy agency said in February.

Another 190 nationals were actively supporting IS back home through fundraising.

Australian Federal Police, which manages the counter-terror response at major airports, said it was working with immigration officials, local police and airlines and airports to ensure security.

"Security operations and patrols have been increased at each of the designated airports in the wake of the Brussels attack," the force said in a statement.

Australia has had three attacks since raising its terror threat level to "high" in September 2014, including a cafe siege in the heart of Sydney in December 2014 which left a self-declared Muslim cleric and two of his hostages dead.

In September 2014 an 18-year-old suspected militant was killed after he stabbed two police officers in Melbourne and last October a 15-year-old boy was killed in Sydney after he shot dead a civilian police employee.