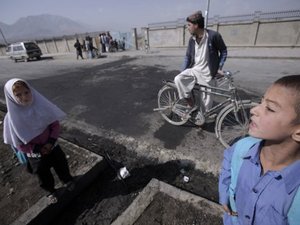 Four Afghan children were killed on Friday when a bomb exploded as they played near their home in the warring country's troubled east, which borders Pakistan, officials said.

The blast in Nangarhar province is the latest reminder of the high death toll suffered by civilians in the current war since the 2001 U.S.-led invasion ousted the Taliban from power.

"Four children were killed and six others were slightly injured as a result of roadside bomb explosion," said Ahmad Zia Abdulzai, a spokesman for the governor of Nangarhar. "The incident took place around 9:30 am (05:00 GMT)."

But the interior ministry said the explosion was caused by a mortar apparently left over from Afghanistan's decades of war.

Afghanistan faced years of conflict before 2001 and explosive devices dating from this period regularly cause deaths and injuries, often to curious children.

However, most bombings are linked to an insurgency being waged by the extremist Taliban.

The United Nations said the number of civilians killed in the war during the first half of this year rose 15 percent to 1,462, with insurgents responsible for 80 percent of the deaths.

There are around 140,000 international troops, mainly from the United States, in Afghanistan helping government forces combat a Taliban-led insurgency.