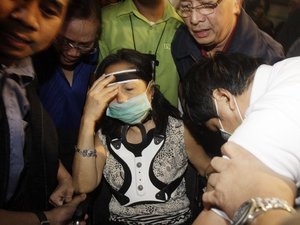 Philippine police arrested ex-president Gloria Arroyo at her hospital bed on Friday on charges of conspiring with a feared warlord to rig an election, an offence that could lead to life in jail.

The events capped a tumultuous week in Philippine politics that had seen the government block Arroyo, 64, from leaving the country after she arrived at Manila airport wearing a neck brace and saying she needed medical care abroad.

The decision by the Commission on Elections to charge her Friday with rigging the 2007 senatorial elections also marked the high-point in President Benigno Aquino's campaign to hold his predecessor to account for alleged graft.

"Mrs. Arroyo is compelled to stay in the country and face the charges of electoral sabotage," Justice Secretary Leila de Lima told reporters after a Manila court issued an arrest warrant against the ex-president.

"(This case) has great implications not just to the integrity of our electoral system, but also to the very principles of democracy.

"It is our desire... that the Filipino people are finally given the justice they duly deserve."

Police then served the arrest warrant on Arroyo on Friday night at a Manila hospital where her aides said she was being treated for a rare bone disease that had led to three unsuccessful spine operations this year.

However Senior Superintendent James Bucayo, who served the arrest warrant, told reporters at the hospital that she would remain there until she was well enough to leave.

"We just put police guards outside her room," he said.

Arroyo, the country's second female president who is now a congresswoman, had been accused of many corrupt acts, such as bribery, and efforts to rig elections during her time in power from 2001 until the middle of last year.

She defeated repeated parliamentary impeachment attempts and coup attempts over the allegations while she was president.

Aquino vowed after winning landslide elections last year that one of his top priorities during his term would be to bring Arroyo to justice.

The election commission said Friday that Arroyo had ordered the wide-scale tampering of ballots in the 2007 senatorial elections.

It said the ballots that had been switched were in the southern province of Maguindanao, which was then ruled by the Ampatuan family.

The Ampatuans were close allies of Arroyo and had a reputation as warlords who enforced their rule of the province for a decade with a brutal private army.

Arroyo was eventually forced to sever ties with the Ampatuans after the family was accused of orchestrating the massacre of 57 people in 2009 to eliminate a rival's political challenge.

The patriarch of the family, Andal Ampatuan Snr, who is on trial for those murders, was also charged on Friday as one of three other people who allegedly conspired with Arroyo to rig the 2007 election.

Arroyo's lawyer, Raul Lambino, denounced the charges against his client as an injustice and a desperate effort to prevent her from leaving the country.

"They are violating the basic rule of due process. It is clear this (decision) was railroaded (forced through) from the start," he said.

Arroyo had arrived at Manila airport on Tuesday night in a wheelchair and looking frail, seeking to fly to Singapore, hours after the Supreme Court overturned a government travel ban on her.

The Supreme Court ruled that she should be allowed to travel because she had not yet been charged with any crimes, rejecting government concerns that she was using her health condition as a ruse to flee into exile.

In a high-stakes political standoff, the government defied the Supreme Court and ordered immigration authorities to stop her from leaving the country, while racing to file charges against her.

The Philippines has consistently been ranked by anti-graft watchdogs as one of the most corrupt countries in the world, and its leaders from national to provincial level are regularly accused of abuses of power.

Arroyo, who was then vice-president, took over in 2001, after her predecessor, Joseph Estrada, was forced to stand down on corruption charges.