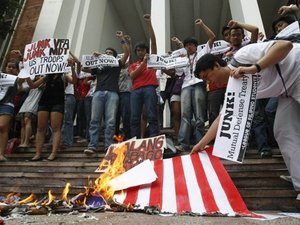 President Barack Obama on Friday hailed the East Asia Summit as the top forum for tackling the region's seething maritime row with China, setting a course for confrontation with Beijing.

The Chinese government has testily declared the South China Sea dispute off-limits at Saturday's talks, to be attended by Obama, China's Premier Wen Jiabao, and 16 other nations including several with claims over the waterway.

But Obama said the gathering, held this year on the Indonesian resort island of Bali, "can be the premier arena for us to be able to work together on a wide range of issues -- maritime security or nonproliferation."

Obama has irritated China with a drive to enhance the U.S. role as a regional power, positioning Marines in northern Australia and pushing for a potentially transformational trans-Pacific trade pact.

Beijing sees the initiatives as intruding into its own sphere of influence, with the dispute over the South China Sea putting the two major world powers' differences into stark focus.

On Friday Wen again warned against interference by "external forces" in the wrangle.

China claims all of the strategic area, as does Taiwan, while four Southeast Asian countries declare ownership of parts of it, with Vietnam and the Philippines accusing Beijing's forces of increasing aggression there.

The region is a conduit for more than one-third of the world's seaborne trade and half its traffic in oil and gas, and major petroleum deposits are believed to lie below the seabed.

Washington says the security of crucial maritime trade routes deserves serious dialogue, even if Saturday's summit -- the first to be attended by a U.S. president -- is not a tribunal for deciding disputes.

At a separate meeting with Philippine President Benigno Aquino, Obama said the two countries, which have a 60-year-old treaty of alliance, were "looking out for each other when it comes to security".

Manila has this year accused Beijing's forces of firing on Filipino fishermen and cutting an oil exploration ship's cables, while it has itself seized small Chinese fishing boats.

Diplomats in Bali have spoken this week about the challenges members of the Association of Southeast Asian Nations (ASEAN), who held their own summit Friday, face as they manage a balancing act between Beijing and Washington.

China is ASEAN's biggest trading partner, and prefers to negotiate with its weaker regional neighbors individually rather than collectively.

In a meeting with Southeast Asian leaders Friday ahead of the wider East Asia Summit, Wen challenged Obama's stance on the summit discussions and said China had only peaceful intentions towards its neighbors.

"The dispute on the South China Sea is a matter that been going on for years. It should be resolved by the relevant sovereign states through friendly consultation and discussion directly," he said in his speech, released by China's official Xinhua news agency.

"External forces should not use any excuses to interfere," he added. "China will never seek hegemony and we are against any hegemonic behavior."

China and ASEAN agreed a non-binding "declaration of conduct" to cover the area in 2002, but it has yet to be fully implemented. Plans for a legally enforceable code of conduct remain far from realization.