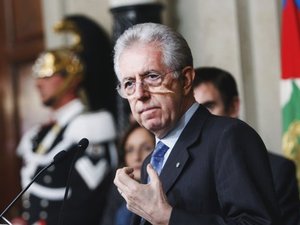 Prime Minister Mario Monti, who has won overwhelming support from the Senate, rushed to firm up ambitious proposals to revitalize the economy Friday as Italy's lower house prepared to vote.

The premier is unlikely to meet opposition in the second confidence vote on his new technocrat government after unveiling a series of bold measures to lift Rome out of the eurozone crisis and to win Europe's support.

In his first speech to parliament, Monti announced a plan to balance Italy's crucial austerity measures with schemes to boost "growth and equity", including investing in women and the young as well as tackling unfair privileges.

Economic experts and political commentators said the softly-spoken but authoritative technocrat had impressed an audience tired of his predecessor Silvio Berlusconi's histrionics, which had failed to stave off market pressure.

His speech Thursday "showed Italians that politics is not the televised theatricals of the last two decades" and laid bare "problems dating back 20 years, which had been left to rot by the Berlusconi show," said the Repubblica newspaper.

The scandal-plagued billionaire bowed to intense market pressure and resigned to cries of "Buffoon!" on Saturday, as Italians danced in the streets.

Although Monti is racing to implement initiatives demanded by Europe, he assured Italians fearful of losing their sovereignty that the reforms were not being "imposed by external forces," insisting: "We are Europe."

"Monti speaks unlike any politician. He's a friend to politics... but he uses the language of Europe, and is tackling the country's problems in a new, innovative way" said Stefano Folli from Il Fatto Quotidiano newspaper.

German Chancellor Angela Merkel and French President Nicolas Sarkozy called the premier after his speech for an "in-depth discussion on the economic situation" and voiced their "full support," Italian authorities said.

Eurogroup chief Jean-Claude Juncker has insisted on the EU's "full confidence" in Rome's ability to overcome the current crisis.

The inclusion of key pension and labor reforms urgently pushed for by the EU in Italy's crisis game plan is expected to reassure markets.

"If we fail, if we don't carry out the necessary reforms, we will also be subjected to much harsher conditions," he warned.

Economics professor Giuliano Noci said the program "includes everything one could imagine carrying out in Italy and would allow -- if implemented -- a truly great revival of the country."

While Monti has won the support of Italy's parliamentarians for now, he could face a political backlash when he begins implementing the painful and delayed economic reforms.

Thousands of students protested ahead of his speech against a technocratic government they fear will favor fat cats and bankers, but the economics professor is supported by over half of Italians, a recent poll found.

Monti faces his first international test next week, when he is expected to travel to Brussels, Berlin, Paris and London.

The rate on Italian 10-year government bonds has hovered around the 7.0-percent warning threshold that set off alarm bells in Europe and beyond, but dropped down to 6.84 percent following Monti's speech.

Fitch ratings agency said Thursday there was "a window of opportunity for the new Italian government to generate a positive surprise" and "break the negative market dynamics," but warned: "Italy is likely already in recession."

The International Monetary Fund (IMF) announced it would send a monitoring team to Italy this month at the invitation of the Italian authorities.

While its high public debt of 1.9 trillion euros ($2.6 trillion) is relatively stable and its deficit relatively low, its anemic growth rate and recent political weakness have pushed up borrowing costs.

Berlusconi had agreed during a G20 summit at the start of November to an embarrassing monitoring-scheme by which the IMF and European Commission would keep an eye on Italy to reassure markets that it was acting to reduce its debt.