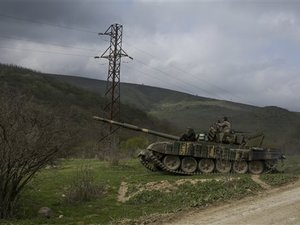 Armenia and Azerbaijan on Saturday traded accusations over the shelling of each other's territory in violation of a days-old ceasefire aimed at halting a flareup of violence over the disputed Nagorny Karabakh region.

The two former-Soviet neighbors exchanged fire overnight but there were no reports of casualties.

A Moscow-mediated truce went into effect on Tuesday after the worst outbreak of violence since the 1990s, but some clashes have continued, with two people reported killed on Friday.

The Armenian defense ministry said Azerbaijan fired on the border area in northern Tavush region 16 times, including with "large caliber" weaponry, but said the intensity of shooting had "subsided".

It said two bodies were recovered during a search along the contact line between Azerbaijan and the separatist Nagorny Karabakh region, hiking the overall toll from the clashes to at least 92.

Baku in turn said Armenia used 60-mm mortars and other firepower to "violate the ceasefire 120 times" overnight, firing on Azeri positions in northern Gazakh, Tovuz and Agstafa regions, among others.

Separatist authorities in Nagorny Karabakh also accused Azeribaijan of shelling its position in the disputed area.

Armenia-backed separatists seized control of Nagorny Karabakh, which is located inside Azerbaijan's territory but populated mainly by Christian ethnic Armenians, in an early 1990s war that claimed some 30,000 lives.

Shooting along the contact line with Nagorny Karabakh as well the Azeri-Armenian border had been a regular occurrence for years.