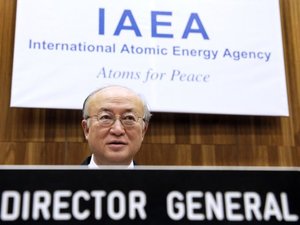 The U.N. atomic watchdog's board passed Friday a resolution of "deep and increasing concern" about Iran's nuclear activities after a damning new report from the Vienna-based body.

But the text, proposed at the International Atomic Energy Agency by the five permanent members of the U.N. Security Council, Germany and 12 others, stops short of reporting Iran to New York or setting Tehran a deadline to comply.

Iran said it would not attend an IAEA forum next week on ridding the Middle East of nuclear weapons and that the resolution would only strengthen its resolve to press ahead with its "peaceful" nuclear program.

The resolution said it was "essential for Iran and the Agency to intensify their dialogue" and calls on Tehran "to comply fully and without delay with its obligations under relevant resolutions of the U.N. Security Council."

A total of 32 countries on the 35-nation IAEA board of governors voted in favor, with Indonesia abstaining and Cuba and Ecuador voting against, diplomats said.

But to assuage Chinese and Russian misgivings, the resolution has no timeframe for Iran to comply, calling instead for IAEA head Yukiya Amano to report to the board in March on Tehran's "implementation of this resolution."

Amano said on Thursday he had written to Iran on November 2 proposing a "high-level" visit to Tehran, saying "clarifying all outstanding issues was in the interests of Iran, and other countries."

"It is clear that Iran has a case to answer," he told reporters.

Last week, the IAEA came the closest yet to accusing Iran outright of seeking to develop nuclear weapons, in a report immediately rejected by the Islamic republic as "baseless."

The U.S. envoy to the IAEA, Glyn Davies, told the board on Friday that the "watershed report ... leaves little doubt that Iran, at the very least, wants to position itself for a nuclear weapons capacity."

He rejected criticism that the resolution was too weak.

"This resolution does the job," Davies told reporters. "It gives us the tools we need to get the job done."

"The United States will continue this pressure until Iran chooses to depart from its current path of international isolation, both in concert with our partners as well as unilaterally," a White House statement said.

Britain, France and Germany said in a joint statement they were "gravely concerned" by the report, saying it "paints a very disturbing picture ... The international community cannot simply return to business as usual."

But Iran's envoy Ali Soltanieh said the report was "unprofessional, unbalanced, illegal and politicized" that has "deeply ruined the worldwide reputation of the Agency as a technical competent authority."

He told reporters that Iran would not suspend its uranium enrichment activities and that the resolution would only serve to strengthen its resolve.

"It will be business as usual ... We will continue our work as before," he said, accusing Amano of making a "historical mistake."

"Many parliamentarians ask me when they see me what the benefit is of being in the IAEA ... This is a legitimate question," he told reporters.

"But the fact is Iran is in the IAEA to put the IAEA on the right track and prevent what the U.S. wants to dictate to the IAEA. That is the reason I am here."

Iranian Foreign Minister Ali Akbar Salehi said on Wednesday that Tehran would send "an analytical letter with logical and rational responses" to the IAEA.

Iran's mission in Vienna meanwhile released a November 16 letter to Amano, saying his "leaking" of names of Iranian scientists made them "targets for assassination" by "terrorist" groups and the U.S. and Israeli secret services.

Washington, Paris and London jumped on the IAEA report as justification to increase pressure on Iran, already under four rounds of Security Council sanctions and additional U.S. and European Union restrictions.

But Beijing, which relies heavily on Iranian oil imports, and Moscow, which also has close commercial ties and built Iran's only nuclear power plant, have been more cautious.

Israel's ambassador Ehud Azoulay on Thursday expressed disappointment at the resolution, having hoped for a stronger response and even what would be a fifth round of sanctions, saying the resolution "could be tougher."

But Western diplomats stressed all major powers had agreed, thus avoiding what would have been a potentially damaging split in the U.N. Security Council, where relations have already been tested this year over Libya and Syria.

"It is good we have a resolution supported by the six (powers)," a European envoy said. "It supports the work of the agency, condemns the lack of Iranian cooperation and calls on Iran to cooperate at last and without delay."

Mark Hibbs from the Carnegie Endowment for International Peace think tank said the text fails to single out weapons-related items in Amano's report, "and, most significantly, it doesn't set any deadline for Iran to comply."