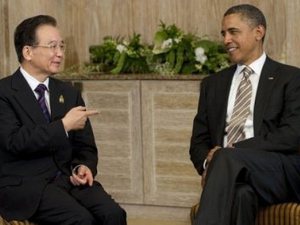 Obama and Wen met on the sidelines of the East Asia Summit on the Indonesian resort island of Bali, following public spats over currency, trade and a territorial dispute in the South China Sea.

The high-level encounter was likely to address the concerns that have arisen as Washington rolls out a campaign to assert itself as a Pacific power and counterbalance China's growing diplomatic, economic and military might.

Obama has escalated U.S. rhetoric towards Beijing, saying that as the world's second-biggest economy China needs to start playing by international "rules of the road" in finance and trade.

Wen and the U.S. president were also seen in close conversation on Friday night at an East Asia Summit gala dinner, where they were seated next to each other.

Obama irked Beijing this week by announcing a deployment of 2,500 U.S. Marines to Australia, which he billed as proof of America's long-term commitment to defending its interests and allies in the region.

The president's strong support for expanding negotiations on a pan-Pacific trade deal when he hosted the APEC summit in his native Hawaii last week also raised hackles in Beijing because China is not included.

And on Friday, Obama hailed the East Asia Summit as the top forum for settling the region's maritime territorial disputes with China, contradicting Beijing's desire to see such rows negotiated bilaterally.

China sees the U.S. Pacific initiatives as intruding into its sphere of influence, and Wen warned again Friday against interference by "external forces" in the territorial wrangle.

China claims all of the South China Sea, as does Taiwan, while four Southeast Asian countries declare ownership of parts of it, with Vietnam and the Philippines accusing Chinese forces of increasing aggression there.

The region is a conduit for more than one-third of the world's seaborne trade and half its traffic in oil and gas, and major petroleum deposits are believed to lie below the seabed.

Washington says the security of crucial maritime trade routes deserves serious dialogue, even if Saturday's summit -- the first to be attended by a U.S. president -- is not a tribunal for deciding on disputes.

But China, the biggest trading partner of the 10-member Association of Southeast Asian Nations (ASEAN) bloc, prefers to negotiate with its weaker regional neighbors individually rather than collectively.

China is also likely to be concerned by a dramatic US foray into Myanmar, its resource-rich ally and southern neighbor.

Obama said Friday after a phone call with democracy leader Aung San Suu Kyi that he would send Hillary Clinton to Myanmar next month, the first visit there by a U.S. secretary of state for 50 years.

The goal is to encourage signs of democratic reform from the new nominally civilian regime in a country which for decades was ruled by a military junta.

After "years of darkness, we have seen flickers of progress in the last several weeks" in Myanmar, Obama said.

Suu Kyi's National League for Democracy said Friday it would re-register as a political party and contest coming by-elections after boycotting last year's poll, paving the way for the 66-year-old Nobel laureate to run for office.

Myanmar has already won Southeast Asia's backing to chair its regional bloc in 2014, despite rights groups saying the move was premature and could remove the incentive for more fundamental reform.

In a busy day of diplomacy in Bali, Wen also met the leaders of South Korea and Japan, and the trio committed to working together to resolve the North Korean nuclear standoff, South Korean news agency Yonhap reported.

"The three leaders shared an understanding that they should cooperate closely at a time when uncertainties in the world economy are growing, so they can contribute to stability and development in Northeast Asia and reviving the world economy," South Korean President Lee Myung-Bak's office said.