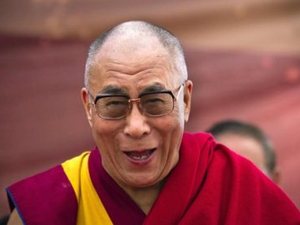 Tibet's exiled spiritual leader the Dalai Lama has said he is worried about the growing number of monks and nuns setting themselves on fire in southwest China, in an interview broadcast Saturday.

The Dalai Lama told the BBC that those setting themselves alight were courageous, but questioned how effective self-immolation was as a form of protest against Chinese rule.

"The question is how much effect" the self-immolations have, the 76-year-old asked British broadcaster.

"That's the question. There is courage -- very strong courage. But how much effect? Courage alone is no substitute. You must utilize your wisdom."

Eight Buddhist monks and two nuns have set themselves alight in ethnically Tibetan parts of Sichuan province since the self-immolation of a young monk in March at Kirti monastery sparked a government crackdown.

Activists say that at least five monks and two nuns have died and that Chinese police have at times responded by beating the burning protesters and their colleagues rather than providing assistance.

Many Tibetans in China are angry about what they see as growing domination by the country's majority Han ethnic group.

Asked whether the self-immolations could make life worse for people in Tibet, the Dalai Lama said: "Many Tibetans sacrifice their lives.

"Nobody knows how many people killed and tortured -- I mean death through torture. Nobody knows.

"But a lot of people suffer. But how much effect? The Chinese respond harder."

The Dalai Lama, who fled Tibet following a failed uprising against Chinese rule in 1959, founded a government in exile in the northern Indian town of Dharamshala after being offered refuge there.

He remains revered in China's Tibetan areas but is vilified as a "separatist" by China's communist authorities.